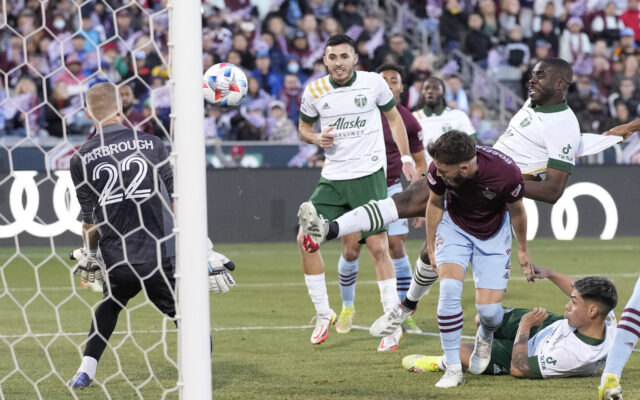 The magical season for Portland continues after taking down top-seed Colorado 1-0 at Dicks Sporting Goods Park for the first-ever MLS game on Thanksgiving. Larrys Mabiala secured the game-winner in the 90th minute after cleaning up the mess from a corner, he has now scored crucial goals in back-to-back playoff games after going scoreless the entire season.

While Portland is onto the Western Conference final for the third time in the last seven seasons it didn’t come easy in Colorado. The men in green were on the back foot for the majority of the first half; Colorado outshot Portland 9-2 with Steve Clark forced to make three key saves.

Expected goals marked in the Rapids favor .91 to .05 at the halftime whistle but Portland used the break to their advantage, resetting and coming out strong in the second half.

Portland’s offensive leader Sebastian Blanco went down early with an apparent hamstring injury just after halftime, unlike last game against Minnesota Blanco could not carry on and Giovanni Savarese subbed him out for Santiago Moreno. Rather than sinking with the heart of their team injured, Portland used it as motivation and was far superior in the final 30 minutes of the affair.

Portland outshot Colorado 10-1 in the second half and several Timber counterattacks were worthy of goals but nothing connected until the final minute of regulation. Enter Defender Larrys Mabiala who was a hero at Providence Park on Sunday and then wrote his name in Timber history tonight taping in the winner from a corner:

The Timbers have now won six road playoff games in their MLS history and tonight’s was one of the most impressive against the top-seeded team in the west.

Portland will wait for the Real Salt Lake vs. Kansas City matchup on Sunday and face the winner on December 4th or 5th.