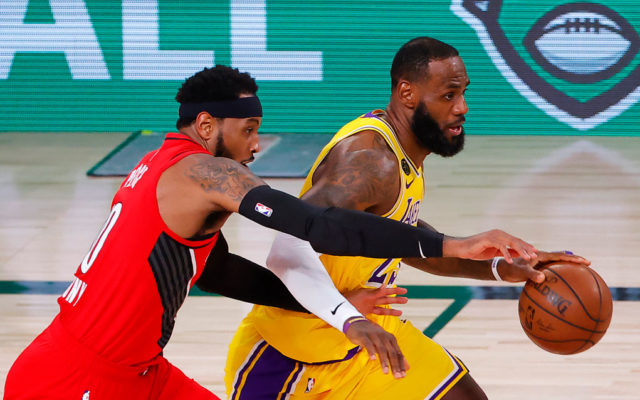 As bad as the Lakers were in Game 1, the Blazers were worse in Game 2 as Los Angeles took Game 2, 111-88. To make matters worse, Damian Lillard was injured.

Good news? He’ll have a full day to heal. Game 3 is Saturday. Bad news? This from Terry Stotts

“I think it’s too early to say what his status is for the next game.” Blazers coach Terry Stotts on Damian Lillard, who dislocated his left index finger against the Lakers. #RipCity

As for the game, Portland scored 20 or fewer points in each of the first three quarters. After Lillard got hurt in the third, Terry Stotts pulled CJ McCollum, Carmelo Anthony and Jusuf Nurkic to start the fourth.

Anthony Davis and LeBron James looked like men on a mission from the jump. AD finished with 31 points and 11 rebounds, James only had 10 points, but he also had seven assists.

Kantavious Caldwell-Pope redeemed himself after being just terrible in Game 1 when he scored just one point. KCP was 4-for-6 from three and 16 points overall.

As for Portland, the Blazers had just two of their regulars in double figures. Lillard with 18 and McCollum with 13. They both made six shots — Lillard on 14 attempts, McCollum on 16.

Carmelo Anthony did nothing, while Jusuf Nurkic and Gary Trent, Jr. struggled. Melo shot 1-for-6 with two points. Nurk was 4-of-10 with nine points. GTJ finished 3-of-7 with eight points.

Here’s hoping Game 3 is better because Game 2 was just awful.