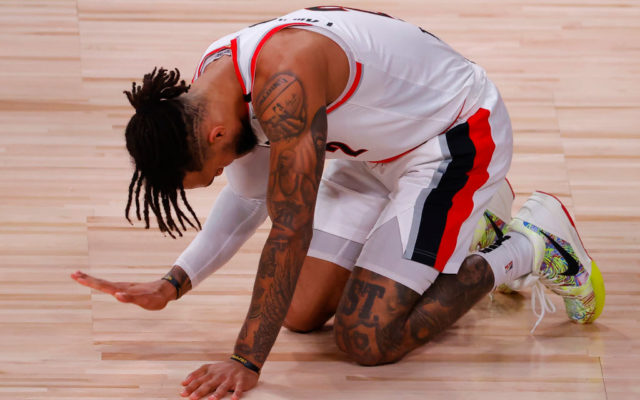 If you don’t believe in divine intervention, I understand, but Monday night seems like a good example.

August 24, aka Mamba Day (8/24) in honor of the two numbers the late Kobe Bryant wore in Los Angeles. The Lakers even led Portland 24-8 in the first quarter.

Simply put, Portland didn’t stand a chance, and Monday was all about the Lakers. LA started the game on a 15-0 run, and they eventually won 135-115.

LeBron James continued his hot streak from Game 3. He even hit a Dame Shot.

This LeBron three from DEEP summarizes how the Lakers-Blazers game has gone. 🔥 pic.twitter.com/asGxiUWv0Y

Anthony Davis left the game midway through the third quarter with back spasms. He did his fair share of damage in just 18 minutes — 18 points, five rebounds, five assists and two blocks.

Damian Lillard left the floor in the third, and TNT showed him doubled over in the back hallway. He didn’t return to the game, and he finished with 11 points and four assists.

He also underwent an MRI, the results of which were not available at the time of posting this story.