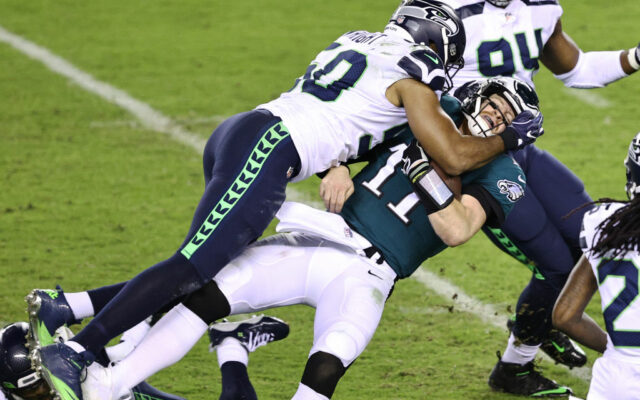 The Seattle Seahawks have one of the best linebacker duos in the NFL. However, one of their pair is set to become a free agent.

KJ Wright finished his eighth NFL season (2018) with only five games played, but he wasn’t sure if he’d be back. Then, he signed a two-year deal. His ninth and 10th seasons were some of his best.

Last season, Wright moved from weakside linebacker to the strongside LB after Bruce Irvin tore his ACL in Week 2.

He was still consistent in 2020: 86 total tackles, 11 tackles for loss, 10 passes defensed, two sacks, two fumble recoveries, a fumble forced and an interception.

.@Seahawks LB @KJ_WRIGHT34 was the only player in the NFL with 10-plus tackles for loss (11) and 10-plus passes defensed (10) this season. #GoHawks pic.twitter.com/dkpBgLQHdc

Seattle’s playing is done until next season, but the offseason could be full of losses. There are 30 players that will be free agents in 2021, including Shaquill Griffin, Bruce Irvin and Wright among others.

John Schneider will have his hands full after signing his big extension.

Wright told reporters on Sunday that his initial goal when entering the league was to make it 10 seasons. Well, he’s done that. Now, he wants to keep playing and come back to Seattle.

“This season was everything that I hoped it will be, just my 10th year with Seattle, I was balling just looking good, making plays all over the field, and it felt really, really good, because a lot of people counted me out,” Wright said. “A lot of people doubted that I could do it, and I proved to myself how good I am, I proved to the whole world how good I am. So I’m proud of myself, I’m proud of my team for helping me get here… This season couldn’t have gone any better.

Seattle should be motivated to keep Wright because, like I said at the top, the Seahawks have one of the best linebacker duos in the NFL today.

“What he’s been able to do has been extremely impressive,” Wagner said. “He had a pretty crazy injury, then to come back to have one of his best seasons, and then to play even better the following year, with his position change and things like that, I think he’s just shows his versatility, shows how smart he is. It shows how much he cares about everybody in the building. He’s just a great person and a great leader. I definitely feel like he’s somebody that needs to be back next year, and I look forward to seeing him back.”

Wright’s last contract was for two years and $14 million. At 31 years old, it will be interesting to see what kind of deal Schneider and the Seahawks offer, and if Wright will accept if it’s a low offer.