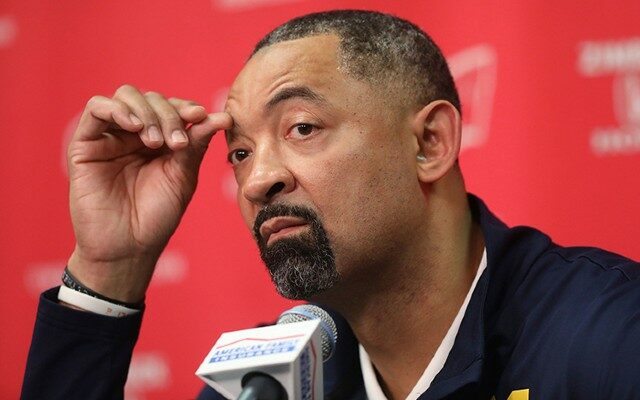 Juwan Howard has been suspended the rest of the regular season and fined $40,000 for his role in a postgame altercation following Sunday's loss at Wisconsin (AP Images)

Howard has been suspended five games, which is the rest of the regular season, and will also be fined $40,000.

Michigan players Terrance Williams and Moussa Diabate as well as Wisconsin’s Jahcobi Neath were each suspended one game by the Big Ten.  Each player was seen to attempt throwing a punch in the melee.

Wisconsin head coach Greg Gard was fined $10,000 for violating the conference’s sportsmanship policy.  He was not suspended.

Howard issued a statement through the University of Michigan in which he apologized for his actions.

“After taking time to reflect on all that happened, I realize how unacceptable both my actions and words were, and how they affected so many. I am truly sorry,” Howard said in a separate statement released by Michigan on Monday. “I am offering my sincerest apology to my players and their families, my staff, my family and the Michigan fans around the world. I would like to personally apologize to Wisconsin’s Assistant Coach Joe Krabbenhoft and his family, too.

“Lastly, I speak a lot about being a Michigan man and representing the University of Michigan with class and pride, I did not do that, nor did I set the right example in the right way for my student-athletes. I will learn from my mistake and this mistake will never happen again. No excuses!”

Michigan is 14-11 overall and 8-7 in the Big Ten after Sunday’s defeat.  Without Howard on the sideline, assistant coach Phil Martelli, the former longtime coach at St. Joseph’s, will assume interim head coach responsibilities.  Michigan has four consecutive home games before finishing the regular season with a road visit to Ohio State.

Michigan is considered a bubble team for the NCAA Tournament entering this pivotal stretch of games.

750 The Game is your home of March Madness from Westwood One, including a live Selection Sunday special on March 13th from 2pm-5pm.