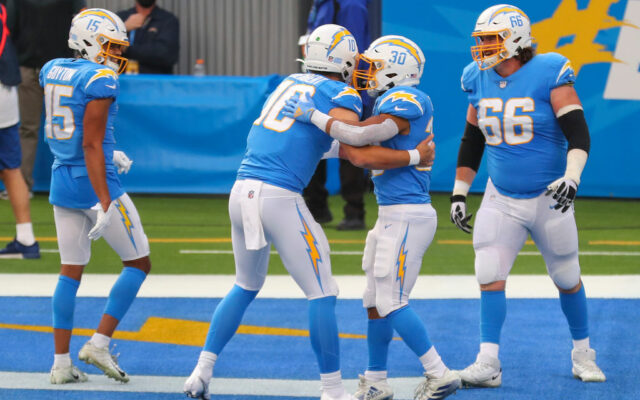 I feel like every week I’m writing about how Justin Herbert set another rookie record or won another award. To be clear, I’m not complaining. Even as a WSU Coug grad, I really like the kid.

He’s proving everyone who said he wasn’t worth the risk of the No. 6 pick wrong. He’s also proving me right when I said he would be worth it.

He still has another game to add to his rookie season total.

Then, he joined former NFL MVP and last year’s Super Bowl MVP Patrick Mahomes as the only quarterbacks with 4,000+ passing yards in their first 14 starts. He’s also just the fourth rookie to throw for 4,000 yards in a season.

Remember, Herbert didn’t even start the first game of the season, and in all fairness he found out he was starting the second game of the year minutes before kickoff. So, he wasn’t even fully prepared to start the Week 2 game.

In other words, Herbert could be even higher on all the statistical lists than he is right now.

He leads rookie quarterbacks in all categories, but how does he stack up with the rest of the NFL?

He’s also completing 66.3 percent of his passes — 13th best and the same as Mahomes this season among QBs who have played at least 11 games.

Obviously, Herbert and the Chargers would prefer the stats translated to more wins (5-9), but you can’t blame Herbert for leads the defense gave up.

The team held tough with Buffalo who just won the AFC East.

Obviously, the outlier is the 45-0 loss to New England and Bill Belichick, but to be fair Belichick is ridiculously good against rookies. He’s 21-6 against rookie QBs since he took over the Pats in 2000.

I know I’ve heard fans say LA should fire head coach Anthony Lynn. I’m not quite there yet. I think Lynn is a good head coach, but I think he needs to let someone else focus on the play calling.

Quarterbacks that don’t get to have continuity in the NFL usually struggle.

Marcus Mariota had three head coaches in four seasons with Tennessee and what happened? He eventually got benched. Now, he’s Las Vegas where he might challenge Derek Carr next year for the starting job.

Ryan Tannehill had three head coaches in six seasons with Miami and what happened? He was basically labeled as a bust. Then, he went to Tennessee in 2019, took Mariota’s job and won NFL Comeback Player of the Year while leading the Titans to the AFC Championship Game.

Consistency and continuity matters. However, if Herbert is playing this well in spite of Lynn, then he will be good with anyone as the coach. So let’s look at the flip side, change being good for Herbert.

Look at Aaron Rodgers, he was great even with Mike McCarthy as his head coach. Then, look at how much better Rodgers has looked the last two seasons with Matt LaFleur.

I’m just trying to play devil’s advocate even against my own argument.

Deep down, I believe Herbert would be good with anyone as the coach. However, I believe Lynn deserves a chance to coach Herbert again next year.

Lynn just needs to be more loose with his play calling. He’s far too conservative when LA gets a lead. Lynn should be calling plays to win instead of plays not to lose.