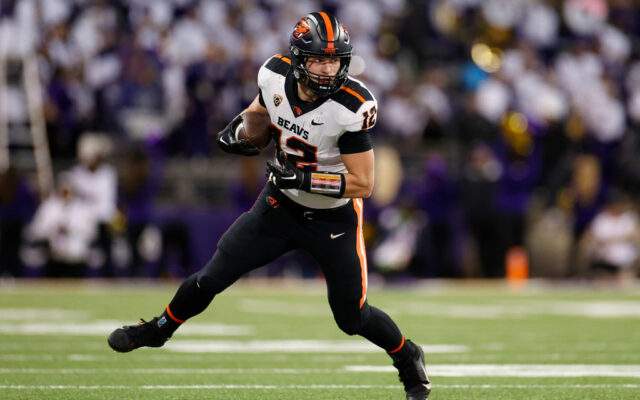 Oregon State redshirt senior Jack Colletto has been named one of four finalists for the Hornung Award, the Lousiville Sports Commission announced Thursday. The honor is given annually to college football’s most versatile player.

The honor is in its 13th season, and is in tribute to the late Paul Hornung. The winner and his family will be honored at the Paul Hornung Award dinner in Louisville in March of 2023.

Colletto has played in all nine games for the Beavers this season. He has rushed for 85 yards and six touchdowns on 23 carries, while also completing one pass for 16 yards. Additionally, on offense, he has also caught three passes for 46 yards. Defensively, the Camas, Wash., native has 19 tackles with a fumble recovery and forced fumble. He’s also been a special teams regular for the Beavers in 2022.

Colletto has twice been named to the award’s weekly honor roll, doing so after Oregon State’s victories over Boise State and Fresno State.

The other finalists include Ohio State’s Emeka Egbuka, Alabama’s Jahmyr Gibbs and Clemson’s Will Shipley. A 17 person selection committee will choose the finalist, along with the fan vote, which comprises the 18th vote. Fans can vote through Dec. 4 by visiting osubeavers.com/votejack. Voting is permitted once per day.

The 13th annual Hornung Award winner will be announced on Dec. 7.