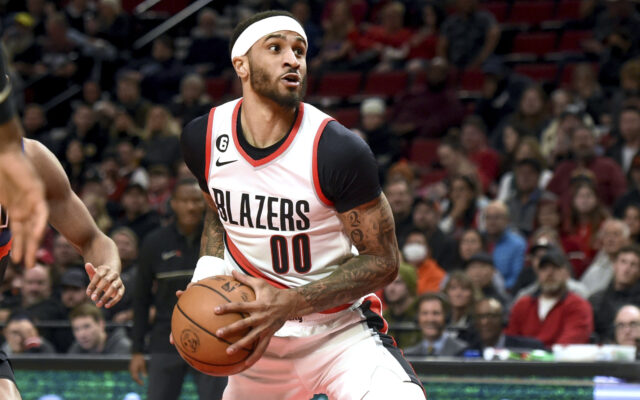 Portland Trail Blazers guard Gary Payton II drives to the basket during the first half of an NBA basketball game against the Detroit Pistons in Portland, Ore., Monday, Jan. 2, 2023. It was Payton's first game of the year after fighting injuries. Payton underwent abdominal surgery in the offseason and initially hoped to be ready for the start of the regular season.The Blazers won 135-106. (AP Photo/Steve Dykes)

Jerami Grant led the way with 36 points against his former team.  Anfernee Simons had 30 points.

It was Payton’s first game action since rehabbing from core muscle surgery.  He missed the first 35 games of the season.

Payton called the rehab process “frustrating.”  The former Oregon State Beaver was effective in his first action as a Blazer, hitting a corner three in his first shot attempt and making multiple hustle plays during his limited game action.

The Blazers led by as many as 34 points on their way to a much-needed blowout victory.

Portland is 19-17 on the season, currently good for the 7-seed in the Western Conference standings as of Tuesday, Jan. 3rd.  They are 4.5 games out of the top seed in the West.

The Blazers are next in action Wednesday night visiting the Minnesota Timberwolves.