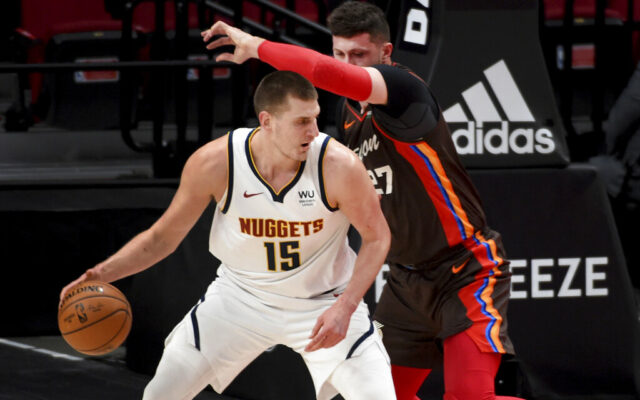 The Portland Trail Blazers are back in the postseason for an eighth straight year.

Sadly, three of the last four trips Portland has been eliminated in round one. However, the one time they made it past the first round, the Blazers reached the Western Conference Finals by beating their upcoming opponent, the Denver Nuggets.

There are a ton of things to know or look for in this playoff series, but I’ve whittled it down to four. Let’s go.

In 15 career regular season games against Portland, Murray is averaging 15.2 points, 3.7 assists and 3.5 rebounds per game. However, he’s gotten better against the Blazers over the years.

For the playoffs, Murray was a problem Portland during their only meeting in 2019. He averaged 23.6 points, 6 boards and 5.3 assists per contest.

Luckily for the Trail Blazers, Murray won’t be a participant in the series. The four-year vet tore his left ACL on April 12 against Golden State.

Since the injury, the Nuggets have used a few players to fill-in, including former Blazer Will Barton. Unfortunately for the Nuggets, Barton got hurt on April 23 and hasn’t played since, but there’s reportedly a chance Barton could be ready by the time the first round series starts this weekend.

Barton, Facundo Campazzo and Austin Rivers have mostly shouldered the point guard load since Murray went out for the rest of the season. None of them have been spectacular, however each has held their own.

Although the point guard position is a semi-revolving door for the Nuggets, MVP candidate center Nikola Jokić does a lot of passing, averaging 8.3 assists per game this year. He’s at the crux of the Denver offense and can even be called a “point center” at times.

The last time Portland met with the Nuggets in the postseason, Michael Porter Jr. was a bench dweller. Now, he’s a full-fledged starter, and he’s also stepped up in Murray’s absence.

Some context: Turner’s middle finger was in response to Nuggets’ rookie Michael Porter Jr., who flipped off Portland in the closing moments of Game 5. Turner also said the Nuggets bench was “talking crazy” telling the Blazers the series was over. https://t.co/mSmr7GpkAS

Maybe that beef carries over but probably not. He also played for Brandon Roy at Nathan Hale HS.  So, don’t be surprised if Porter is extra motivated to beat the Trail Blazers given the history.

Anyway, in five career games against Portland, Porter averages 14.2 points and 6.2 rebounds per game. He may not be the biggest X-Factor, but he’s certainly going to be a factor.

Norman Powell and Robert Covington will likely be tasked with defending Porter on defense when RoCo isn’t guarding the next guy to know, Aaron Gordon.

The Nuggets did a lot of dealing at the trade deadline. They acquired the guy Portland has tried to snag for years, Orlando’s Aaron Gordon.

Since joining Denver, Gordon is averaging 10.2 points, 4.7 rebounds and 2.2 assists. Also, he’s shooting 50 percent from the floor but just 26.6 percent from deep as a Nugget. Granted, Gordon is not a great three-point shooter, he averaged just above 32 percent in six-plus seasons in Orlando.

Gordon will be a tricky guard for the Blazers. The obvious choice is Robert Covington given his bulk; Gordon is 6-foot-8 and 235 pounds while RoCo stands at 6-foot-7 and 209 pounds.

Also, Derrick Jones Jr. could get some run if Anthony and Kanter prove they can’t handle Gordon. However, Jones’ lack of size (6-foot-5, 210) and apparently being in Terry Stotts’ doghouse could prevent this idea though. At the moment, Jones seems to be a “last-ditch effort” decision.

Nikola Jokić deserves the MVP consideration he’s getting from Vegas and the media. He’s also going to be a load for the Trail Blazers to deal with as usual.

Jokić averages 18.4 points, 9.1 rebounds and 5.4 assists in 22 career games against Portland. The Nuggets trusted him so much they basically gave Jusuf Nurkić to the Trail Blazers for nothing back in 2017.

In 10 career games against his former team, Nurkić averages 17.8 points, 9.8 rebounds and 2.2 assists per contest. The only team Nurk averages more points against is Brooklyn (18.5 ppg in 11 games).

We hope the Bosnian Beast can once again wish Denver a “happy summer.”

Jusuf Nurkic wishing his former team (the Nuggets) a “happy summer” after defeating them in Portland on Tuesday
this man lives by the code👊🏽 pic.twitter.com/RVPbssPDW9

History Between Portland and Denver

The two teams have only played once in the postseason since the late 1980’s. Obviously, it’s the seven-game 2019 thriller in the Western Conference Semifinals, which Portland won 4-3. The other two playoff series featuring Blazers-Nuggets were round one of the 1986 postseason (DEN won 3-1) and the Western Conference Semis in 1977 (POR 4-2), which Portland obviously won en route to their lone NBA title.

The next incarnation of Blazers-Nuggets will start sometime this weekend. Official times have yet to be announced because of the NBA Play-In Tournament running Tuesday (May 18) through Friday (May 21).