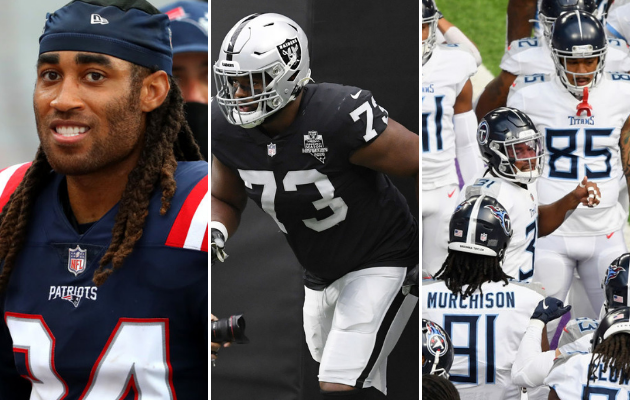 The coronavirus incubation period — aka the time it can take for a person exposed to the virus to develop infection — can take between two and 14 days. In other words, it can take anywhere from 2-14 days before someone tests positive for COVID-19.

Patriots quarterback Cam Newton “officially” tested positive last Friday. In other words, Newton could have been accidentally transmitting the disease to others for up to 14 days without his knowledge.

Now with Gilmore’s positive test, it’s reasonable to think he already had COVID-19 when the Pats played Kansas City on Monday. However, we don’t know for sure how long Gilmore had the virus.

Gilmore played every defensive snap for New England. Then, after the game, he dapped up Chiefs QB Patrick Mahomes. So Mahomes theoretically could have it now too, but we may not know for up to 14 days. And on down the rabbit hole we go.

This is the risk the NFL ran by simply postponing the Patriots-Chiefs game from Sunday to Monday night. As of writing this post, no Chiefs player has reportedly tested positive for the virus.

Where the NFL goes from here will be very telling. What they should do in the name of “player safety” is press pause on the season. I know some people will react negatively to that idea, but if the NFL wants to avoid a league-wide outbreak, a brief pause is the way to go.

The virus can take up to 14 days to develop infection in a person. So, pause the season for three weeks. Two weeks for all the players potentially exposed to either develop infection or prove they unequivocally do not have COVID-19. The extra week is to give some time for those already infected to kick their symptoms.

Now, three weeks is probably not enough time for everyone to get healthy or be symptom-free, but it would allow the NFL to do the bare minimum to protect the rest of the players who haven’t been infected yet.

The NFL choosing to only postpone the Patriots-Chiefs game one day, from Sunday to Monday, proves they aren’t really taking the virus seriously. It took me one google search to check the incubation period length.

The league knew the risks, and the potential number of days it would take for the virus to show itself on a test, and yet they thought a one day postponement would be sufficient. Ridiculous.

Well, now we wait to see the fallout from these latest four players testing positive.

So far, the Patriots have canceled Wednesday’s practice. The Raiders have decided to keep their facility open today.

As for the Titans, they were scheduled to reopen their facility today, but with two new positive tests that won’t happen. Tennessee is now up to 22 players and staffers who have tested positive for COVID-19 since Sept. 24.

If the NFL chooses to not pause the season, this week’s games potentially affected are Denver at New England, Buffalo at Tennessee, and Las Vegas at Kansas City.