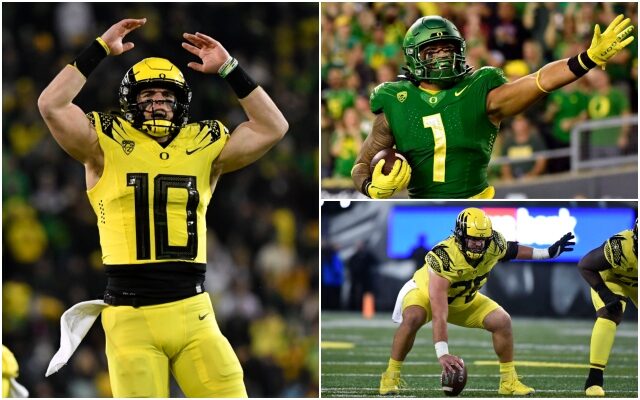 Nix and Sewell are two of 20 players on the semifinalist list for the Walter Camp Player of the Year award, the fourth-oldest college football award in the nation. Oregon is one of six teams to have multiple players named semifinalists, along with Alabama, Georgia, Ohio State, Tennessee and USC. The Walter Camp Football Foundation will announced five finalists on Wednesday, Nov. 30.

Forsyth is one of 20 players to be named a semifinalist for the Jason Witten Collegiate Man of the Year award, which is meant to honor exemplary leadership by a college player. The three finalists for the honor will be announced on Wednesday, Dec. 14.

» On the watch list for the Rimington Trophy (nation’s top center) for the second year in a row.

» Started all 10 games for the Ducks at center this season; 26 career starts.

» Leader on an Oregon offense that ranks second nationally in total offense (527.7 YPG) and fourth in scoring (42.2 PPG).

» Oregon ranks ninth in the FBS with 239.4 rushing yards per game, including three 300-yard rushing games.

» No. 3 among all Pac-12 offensive linemen and No. 5 nationally among centers with a 87.5 pass-blocking grade by Pro Football Focus.

» Has allowed zero sacks and just one pressure in 322 opportunities this season, according to PFF.

» Pac-12 Offensive Lineman of the Week after Oregon’s dominant win over then-No. 9 UCLA.

» Leads the nation with a 72.8 completion percentage, and ranks fifth with a 173.16 passer rating.

» Leads all Pac-12 players and all FBS quarterbacks with 14 rushing touchdowns, tied for sixth in the nation.

» 14 rushing TDs are second-most in a season by an Oregon quarterback, just one shy of Marcus Mariota’s record of 15 (2014).

» One of just three FBS quarterbacks since 2000 with at least 24 passing touchdowns and 14 rushing touchdowns through a team’s first 10 games, joining Lamar Jackson (2016, Louisville) and Jalen Hurts (2019, Oklahoma).

» Joined Bowling Green’s Josh Harris (2001) as the only FBS players since at least 1996 to have two passing TDs, two rushing TDs and a receiving TD in the same game (at Colorado).

» One of just two quarterbacks in the nation with at least 2,500 passing yards and 500 rushing yards (Drake Maye).

» One of three FBS QBs this season with double-digit TDs both passing and rushing (Jayden Daniels & Riley Leonard).

» The only FBS quarterback this season with three games of three rushing touchdowns (vs. BYU, at Arizona, at Cal).

» Butkus Award semifinalist for the second year in a row.

» Fourth on the team with 43 tackles this season while adding a sack and 3.0 TFLs.

» Made his collegiate debut on offense on Nov. 5 at Colorado, rushing for a 1-yard touchdown.

» Oregon’s first full-time defensive player to rush for a touchdown since at least 1996.