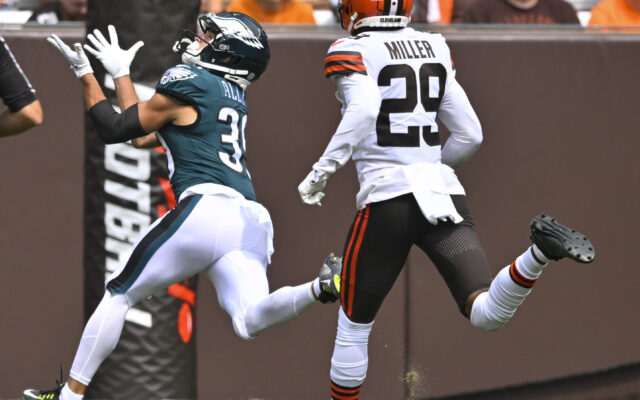 Philadelphia Eagles wide receiver Devon Allen (39) hauls in a pass for a touchdown past Cleveland Browns cornerback Herb Miller (29) during the second half of an NFL preseason football game in Cleveland, Sunday, Aug. 21, 2022. (AP Photo/David Richard)

Former Oregon Duck wide receiver, Devon Allen, had a tremendous 55 yard touchdown catch for the Eagles on Sunday.  Allen,  who is also a three time USATF National Champion in the 110m hurdles, sprinted behind the defense and made a great diving catch for the long touchdown to help give the Eagles a 21-20 win over the Cleveland Browns in Cleveland.

Need a MPH on this route asap. @DevonAllen13

That catch was the only catch that Allen had on the day.  But the 27 year old who decided to pursue his football career in the offseason, signed a 3 year contract this offseason.  While Allen is a longshot to make the Eagles’ 53-man roster, he isn’t going down without a fight. Allen still has a great opportunity at the practice squad, which expanded to 16 players this year.