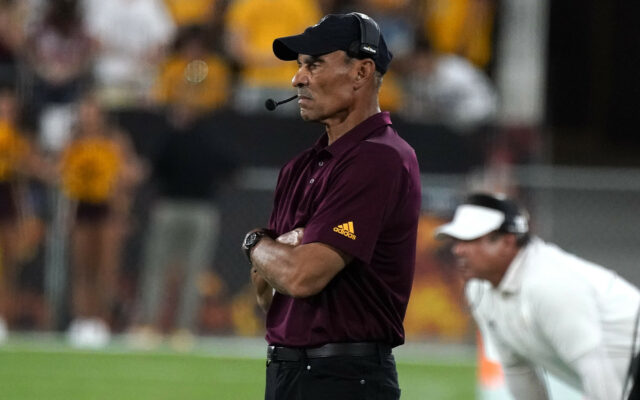 Head coach Herm Edwards has been relieved of his duties by Arizona State. The university announced Sunday the school was making “a change in leadership” by “mutual agreement,” according to athletic director Ray Anderson.

Edwards was let go after an embarrassing 3-21 home loss to eastern Michigan. Edwards was met in the end zone after the game by Anderson and University President Michael Crow:

Herm Edwards was met by the ASU President and AD on the way off the field last night.

I’ve heard of getting tarmac’d but I think Herm is the first coach I’ve seen to get end zone’d… pic.twitter.com/GLQXU5XC9F

Edwards finishes his tenure at Arizona State (1-2) at 26-20 with one bowl win in five years. His time there will be remembered much more for issues off the field, as the NCAA investigation led to five full-time coaches leaving the staff, including both coordinators.

The financial terms for Edwards’ departure were not disclosed; a school spokesman said they are still to be determined. Running backs coach Shaun Aguano be the school’s interim coach.