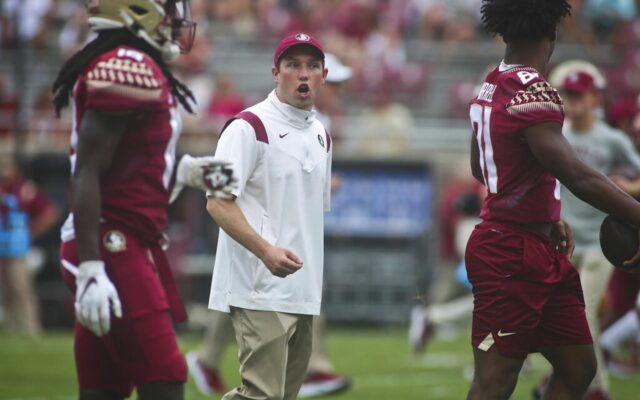 After a world of turnover within Oregon Football, the Ducks have settled the ship hiring Head Coach Dan Lanning over the weekend and now fill the offensive coordinator vacancy with Kenny Dillingham.

Dillingham’s 2021 offense ranked as follows with the Seminoles: 51st in rushing (177.7 yards per game), 72nd in scoring (27.6 points per game), 86th in total offense (379.3 ypg), and 93rd in passing (201.6 ypg). Dillingham crossed over with Lanning at Memphis and Arizona State; Dillingham was Memphis’s offensive coordinator from 2016-2018, in his final season the Tigers ranked fourth nationally in total offense, yards per play and rushing yards per game.

Sources: #FloridaState offensive coordinator Kenny Dillingham is set to leave for the same role at #Oregon under new coach Dan Lanning. An announcement is expected later Wednesday. Dillingham is close friends with Lanning from their time at Arizona State and Memphis.

Dillingham has held coordinator titles at three programs but has never had full-playcalling autonomy. Leaving Tallahassee for Eugene should give the 31-year-old Dillingham absolute authority over play calling. While identity cannot be determined until the pads are on, Dillingham’s impressive rushing attack at Memphis may be foreshadowing for next season’s Oregon offense.

Nearly as important as his work on game day, he is ranked 61st in the 247Sports recruiter rankings for the 2022 cycle.

Current Offensive Coordinator Joe Moorhead will still coach Oregon in the Alamo Bowl at the end of the month versus Oklahoma.