Five Things To Watch For In The Oregon Spring Game 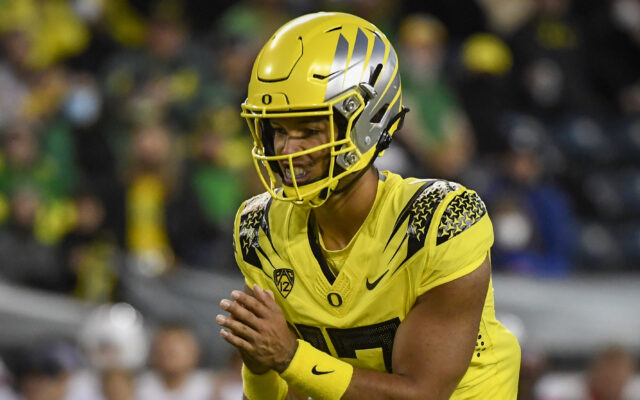 A new era of Oregon football will kick off at Autzen Stadium on Saturday for the Spring Game. Duck fans will get their first taste of a program with entirely new leadership after the departure of Mario Cristobal and the hiring of Dan Lanning. With lots of excitement brewing in Eugene, here are five things to watch for on Saturday:

There is currently a three-man race for the starting job in the fall. Bo Nix, a former five-star recruit and three-year starter at Auburn, transferred to Oregon in December and brings SEC-level experience. Ty Thompson is yet to start a game in his one year in college but is the most heralded of the bunch as the highest rated QB in Oregon football history. Jay Butterfield may be a tier down from the other two in some eyes, but the former four-star from Brentwood, CA still has strong pedigree and could certainly compete for the job. According to reports from spring practice, all three have been rotating with the first team. There appears to be an open race with three talented QBs, and the spring game will give fans a chance to watch all three in live action.

It’s quite clear that involving former players in the program is a big priority for Lanning and his staff. The list of Duck greats in attendance for the game is quite lengthy, and includes names from many different eras of Oregon football. De’Anthony Thomas and Haloti Ngata will serve as honorary captains for the yellow team, while LaMichael James and Arik Armstead will represent the green team. The presence of these former players on Saturday will add nostalgia and a sense of unity, latching generations of Oregon football together as one.

There are lots of question marks on the offensive side of the football, but despite the unknowns, Duck fans should be excited. Kenny Dillingham was the much anticipated offensive coordinator hire for Lanning, a defensive minded head coach. Dillingham, 31, has an impressive resume at major programs in his young career, but fans will be eager to find out what kind of offense to expect next season. Many fans got a jolt when Seven McGee, a sophomore RB/WR, compared the offense to Chip Kelly’s high-powered machine at Oregon from 2009-2012. With a new coordinator and a fresh batch of weapons, the offense will look much different next year and I personally expect more risk-taking, more stretching of the field, and more explosive plays.

Oregon loses many veterans offensively such as Travis Dye, CJ Verdell, Johnny Johnson III and more, but there are plenty of dynamic, young faces who could be poised for breakouts in 2022-2023. Seven McGee, Byron Cardwell, Troy Franklin, and Sean Dollars are the first candidates that come to mind for me, but those are just a few of the many names that will play big roles in Dillingham’s offense. One offseason acquisition that caught some eyes was the addition of Chase Cota, a UCLA transfer originally hailing from Medford, Oregon. Cota caught 67 passes for 883 yards and six touchdowns in four seasons for Kelly and the Bruins. Expect Cota to play a big role on the field and as a veteran leader in the youthful WR room. It should be very exciting to get a glimpse of the new toys Kenny Dillingham will have at his disposal at the spring game.

5. Dan Lanning At The Helm

This will be our first look at Dan Lanning in the head coach/CEO role. Lanning is a proven defensive mastermind, leading one of the greatest defenses in CFB history last season at Georgia. However, this will be our first look at the 36-year-old head coach leading a program. I’m not sure how much we will learn about Lanning’s head coaching capabilities on Saturday, but seeing the new head man in action for the first time will certainly be a welcomed sight for Duck fans.