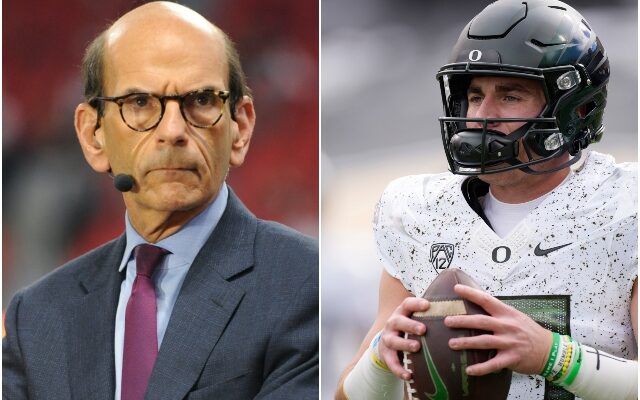 Not many west coast football fans care about Paul Finebaum’s opinion.  Chances are, after Finebaum’s appearance Monday on The Dan Patrick Show (Weekdays 6-9 a.m. on 750 The GAME), that will remain the case.

Finebaum claims the Oregon Ducks have to overcome a perception problem in order to make the College Football Playoff, mainly because of their season-opening defeat to No. 1 Georgia.

“Oregon’s problem is a forty-six point loss to Georgia,” Finebaum said.  “Even this year, when the Pac-12 is a little bit better, winning that league is going to help them enough.”

Finebaum said both TCU and Tennessee have better likelihoods of reaching the playoff, even if the Ducks win the Pac-12 title and Tennessee does not win its own division.

Finebaum also said the Big Ten is likely to try to poach Oregon and Washington from the Pac-12 Conference before its all set and done.

Oregon was No. 8 in the initial College Football Playoff rankings prior to their 49-10 win at Colorado.  The Ducks hope to benefit from No. 4 Clemson’s blowout defeat at Notre Dame and No. 6 Alabama’s overtime loss at No. 10 LSU when the new CFP Rankings are revealed on Tues., Nov. 8th at 4 p.m.  We will cover those rankings live on The Bald Faced Truth with John Canzano on The GAME.