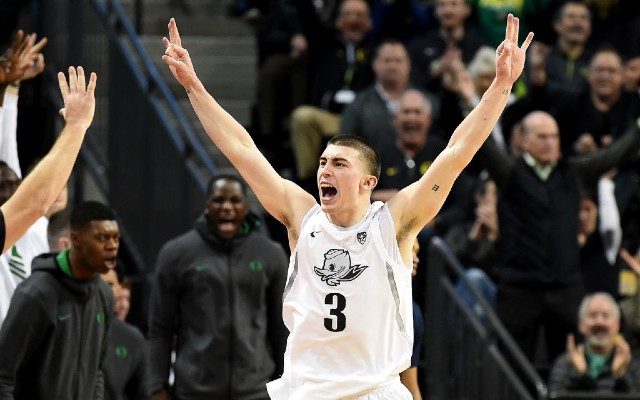 The NBA Draft is just hours away, and fans across the state are wondering where Payton Pritchard will end up.

Oregon’s star point guard built himself into a really intriguing prospect over his four years in Eugene.

Broke down why Oregon PG Payton Pritchard could have a Fred VanVleet type of impact at the NBA level. pic.twitter.com/M2A29kEVRu

If Pritchard has the type of career VanVleet has put together in Toronto, he will be more than pleased.

VanVleet went undrafted in 2016, Pritchard is expected to be picked some time Wednesday night. He spent time as a decent bench contributor while Kyle Lowry and DeMar DeRozan ran the No. 1 offense between 2016-2018.

VanVleet saw his minutes go up, which led to his statistics to rise as well, after DeRozan was shipped to San Antonio for Kawhi Leonard before the 2018-19 season.

In case you forgot, VanVleet was stepped up his shooting on the biggest stage in 2019, the NBA Finals.

He hit a ton of big shots, and he made 44.4 percent of his shots with a 40 percent clip from three. VanVleet averaged 14 points per game in the Finals including a 22-point performance in the series-deciding Game 6.

He was huge to the Raptors winning their first NBA title.

If you’re a Duck fan, you probably know all of these things, but they bear repeating.

The Ducks reached the NCAA Tournament in Pritchard’s freshman and junior seasons. Obviously, his senior year there was no tournament, but Oregon was well on their way to another NCAA appearance.

After a down season statistically his junior year (2018-19), he declared for the NBA Draft, but chose to return to Eugene. He certainly made his final season count.

Pritchard went from 12.8 points to 20.5 points per game. He upped his assists per game from 4.6 to 5.5, while also becoming a slightly increasing his rebounding numbers from 3.9 to 4.3 per game.

Where he really improved was three-point shooting. Pritchard went from 32.8 percent from deep as a junior to 41.5 percent as a senior.

He became the fourth player to lead the Pac-12 conference in points and assists in a single season, joining Gary Payton, Damon Stoudamire and Jason Terry. Oh, and he became the first Pac-12 player to record 1,900+ points, 500+ rebounds and 600+ assists in a career.

Whoever takes Pritchard will be getting a team guy who works hard and scrapped for everything he has today.

Coverage for the NBA Draft starts on ESPN tonight at 4 p.m. PT, while the actual draft is scheduled to begin at 5 p.m. PT.