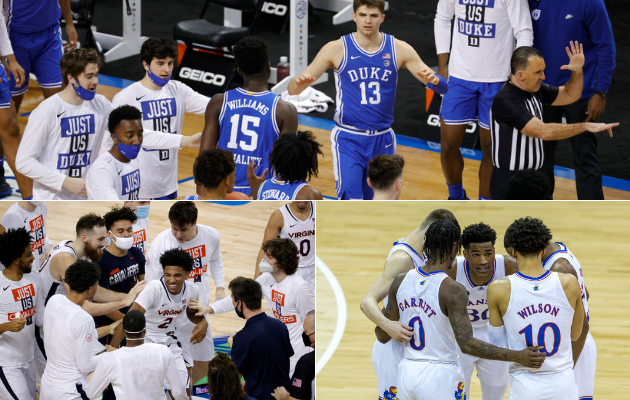 COVID-19 took away the NCAA Tournament last year. The virus won’t stop the big dance this year, but it could cost teams their spot.

Duke had a positive COVID-19 test show up on Thursday, which means they’re out of the ACC Tournament.

Mike Krzyzewski’s squad was attempting to make a run at the ACC Title, but now they will likely miss the NCAA Tournament unless the committee cares more about TV ratings than making sure the best teams make it.

ESPN’s Joe Lunardi does not have Duke in his latest Bracketology, updated at 12:44 a.m. ET on Friday.

Also in the ACC, Virginia is out of the conference tournament after a positive COVID-19 test.

The Cavaliers are ranked 16th in the country, so they’ll make the NCAA Tournament initial field. Lunardi has UVA as the automatic qualifier from the ACC, but obviously that can’t happen now that they’re out of contention for the Conference Title.

Finally, the Kansas Jayhawks had a positive COVID-19 test knock them out of the Big 12 Tournament. KU sits at No. 12 in the latest AP Poll, so they’ll still reach the NCAA Tournament.

Lunardi has the Jayhawks on the three-line, not as an automatic qualifier, so they’re firmly in.

However, none of these teams may play in the NCAA Tournament if they don’t meet certain protocols.

The NCAA has the following requirements for teams to remain eligible to participate in the big dance.

Players, coaches, etc. will also have to show seven negative COVID-19 tests before showing up to Indianapolis. Selection Sunday is on March 14, and the first games are set for March 18.

Now, Kansas and Virginia won’t be in the First Four, which is the first games on March 18. However, the Round of 64 starts on March 19 and 20.

So, for KU and UVA, they would need negative tests for players hoping to participate every day from the day of their initial positive tests (both reported on Friday, March 12) until Friday, March 19 and/or Saturday March 20 for the players who previously tested positive.

Obviously, this is a fluid situation and more details and information will come out as the days go by. If more players test positive for either KU or UVA, they could be out of the NCAA Tournament too.