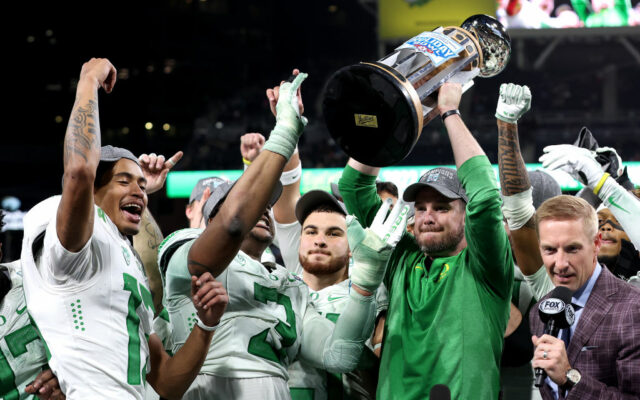 Bo Nix connected with Chase Cota on 4th-&-2 for a six-yard touchdown with just 19 seconds remaining to propel No. 15 Oregon past North Carolina in a memorable Holiday Bowl 28-27 on Wednesday night in San Diego.

The win is the tenth of the season for Dan Lanning in his first year as Oregon Ducks head coach.  The Ducks finish the season 10-3 overall, 7-2 in Pac-12 play.

Nix and the Ducks offense got the ball at their own 21 yard line with 2:24 remaining in the final quarter trailing 27-21.  A pair of completions each to Noah Whittington and Terrance Ferguson followed by a UNC defensive pass interference got the ball down to the Carolina 14 yard line with 1:05 left.

A Tar Heels timeout with 31 seconds to go was followed by a 2-yard Whittingon run on 3rd-&-4, setting up game-winning score on fourth down.

Nix, who announced in the weeks leading up to the bowl game he would return for another season in 2023, finished 23-for-30 for 205 yards, 2 touchdowns and an interception.  His signal-caller counterpart from UNC, the highly-touted Drake Maye, completed just 18 of his 35 attempts for 206 yards, averaging under 6 yards an attempt, with 3 touchdowns and no picks.

Bucky Irving had a huge night on the ground for Oregon, racking up 149 yards on 13 carries (11.5/carry) and two scores, while Cota and Troy Franklin had receiving touchdowns.

Oregon was a two-score favorite in the leadup to the game and closed at Oregon -13 with a total at 76.  North Carolina easily covered with the game going dead under, and the Tar Heels nearly cashing a valuable moneyline, but in the end it was Oregon holding the trophy.