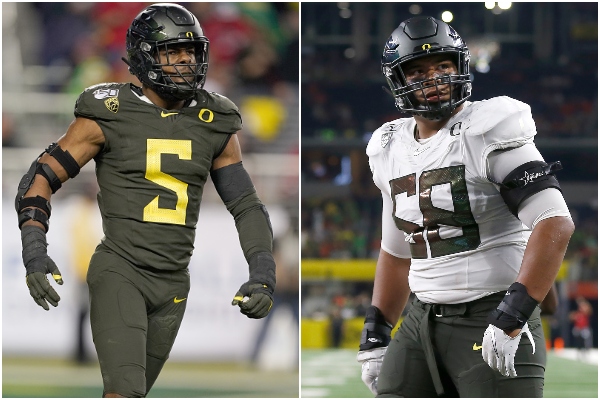 Holland and Thibodeaux are the only duo from the same team on the defensive side of the ball, while Sewell is one of four players on the first team that earned All-America first team honors last year from the Walter Camp Football Foundation.

The first player in program history and the first Polynesian to win the Outland Trophy, Sewell returns for his junior season after becoming just the third Duck to be named a unanimous first-team All-American in 2019. He finished his sophomore campaign as the highest-graded offensive lineman (95.5) in Pro Football Focus (PFF) history and won the Pac-12 Offensive Lineman of the Week honor four times while no other team earned the award more than twice. Oregon is 17-3 over Sewell’s 20 career starts at left tackle, while the Malaeimi, American Samoa native enters his junior season with 678 career pass-blocking snaps and just one sack allowed.

Holland was the sixth player in program history to be named a semifinalist of the Jim Thorpe Award in 2019, tying for the team and Pac-12 lead with four interceptions. Always around the football, Holland was one of four FBS players with four or more INTs in both 2018 and 2019 and is the first player to lead Oregon in interceptions back-to-back seasons since Jairus Byrd (2006 & 2007). He finished second on the team in 2019 with 66 tackles and was one of just 12 FBS players in 2019 with 65 tackles and four INTs. Holland heads into the 2020 season tied for third nationally among active career leaders with nine picks.

Highlighted by an FBS-leading seven sacks in the fourth quarter, Thibodeaux broke the Oregon freshman record with a team-high 9.0 sacks in 2019. His sack total was the most by a Pac-12 freshman since 2009 and he also led the Ducks with 14.0 tackles for loss. Thibodeaux’s dominance off the edge was clear over the final six games of Oregon’s Pac-12 and Rose Bowl championship season with 24 tackles, 10.0 stops for loss and 6.5 sacks over that span. The South Central Los Angeles product set a Pac-12 Championship Game record with 2.5 sacks against Utah and also blocked a punt