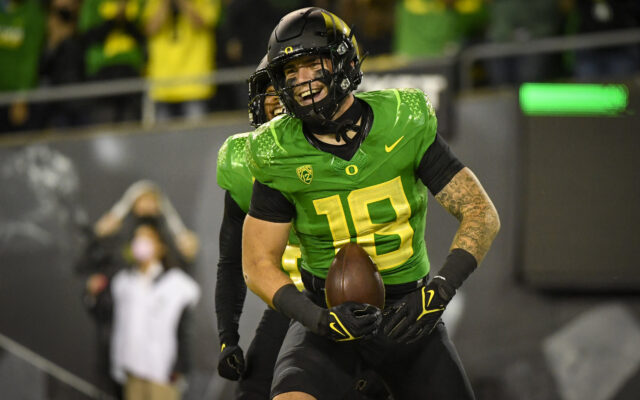 FILE - Oregon Ducks tight end Spencer Webb (18) is shown after a touchdown during an NCAA college football game against Arizona on Sept. 25, 2021, in Eugene, Ore. Webb has died after falling and striking his head on rock slides at a popular swimming lake near Eugene, Oregon. Authorities say the 22-year-old was unresponsive when they arrived at Triangle Lake on Wednesday, July 13, 2022, and found him about 100 yards down a steep trail. (AP Photo/Andy Nelson, File)

Spencer Webb, a tight end on the Oregon Ducks football team, died in a tragic accident on Wednesday near Triangle Lake, authorities confirmed.  He was 22 years old.

“We are deeply saddened to learn of the passing of Spencer Webb,” the University of Oregon athletic department said in a statement. “Our hearts go out to his family, teammates, and friends at such a difficult time. We will miss Spencer greatly.”

Our own John Canzano wrote on Webb’s passing, that his story deserved a better ending.

Webb’s story is a remarkable real-life tale of perseverance. He drifted through a line of homes as a kid, living first with a family friend, then an aunt, then an uncle, then his grandparents in California. Webb’s grades tanked in middle school. He got in trouble as a freshman in high school. His grandparents threw their hands up. Then, came that big brother and his wife, who put their arms around Spencer and tried to give him what he needed.

Others will attempt to define Spencer Webb with his receptions and yards. They’ll embed video clips of him catching passes at Oregon and turn him into nothing more than a football player. The guy was so much more. He was a living, breathing example of a kid dealt a bad hand, who worked hard to rise above it.

Reaction poured in from social media, including from Webb’s former head coach at Oregon, Mario Cristobal, now at Miami.

Love You. Will ALWAYS be Proud of you. Rest In Peace Brother. pic.twitter.com/kpnU2BmNad

🙏 So full of life in every moment of the day. Your smile and energy will be missed Spencer. I love you!

We are deeply saddened to learn of the passing of Spencer Webb. Our hearts go out to his family, teammates, and friends at such a difficult time. We will miss Spencer greatly. pic.twitter.com/VDQJACYlY3

Spencer Webb…dude hit me up every morning about how he would be our best pitcher. Praying for the Webb family, friends, and @oregonfootball players, staff 🙏. #GoDucks

The Pac-12 joins the entire Oregon Ducks community in mourning the tragic loss of Spencer Webb. Our thoughts are with Spencer’s family, friends, teammates and all those whose lives Spencer touched.

We are deeply saddened by the tragic passing of Spencer Webb.

On behalf of all of us at Oregon State, our thoughts and prayers are with the Webb family and Oregon Football community during this difficult time.

Oregon TE Spencer Webb passed away today in a tragic accident. Hurts my heart. Prayers for him and the Oregon fam.