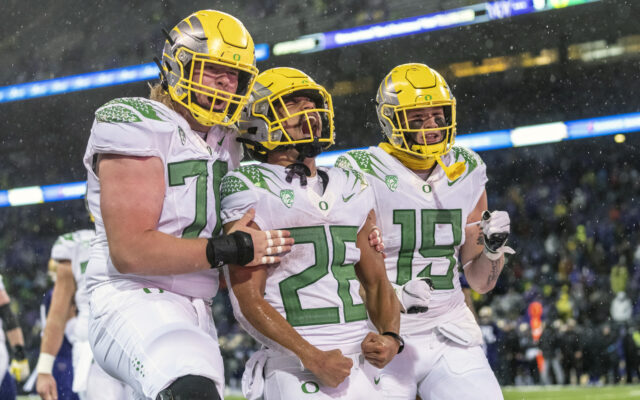 The No. 4 Oregon Ducks annual meeting with the Washington Huskies arrived with no shortage of good old fashion banter back and forth all week between the two programs. The Ducks needed a big win to assert control in the North, while maintaining hope for a CFB Playoff berth when the season concludes.

Things started out shaky for quarterback Anthony Brown Jr, who threw an interception on the Ducks opening possession of the game. The turnover set up the Huskies with a 1st & goal opportunity, in which running back Sean McGrew took full advantage of, punching it in and giving the Huskies an early 7-0 lead.

Oregon was able to move the ball again on their second possession, but the drive stalled at the Washington 28 yard line. Camden Lewis booted the 46-yard field goal to get the Ducks on the board, 7-3.

Oregon’s defense played well all night, but Washington’s special teams kept the Huskies in it early. Washington punter Race Porter pinned the Ducks inside their own 1 yard line to set Oregon up with a long way to go on their third possession. Travis Dye took the hand-off backed up in their own end zone on the Ducks first play, and Washington’s defense stuffed him before he could get out of the end zone.

There was nothing significant to overturn the call on the field of a Safety, so the Ducks found themselves down 9-3 and kicking the ball back to Washington’s offense mid way through the first quarter.

The Ducks’ defense would force Washington to punt the ball four times and turned them over twice, after conceding a touchdown on the Huskies’ first possession of the game (due to the possession starting at the Oregon 5 yard line).

As the first half was coming to a close, Anthony Brown Jr finally found some rhythm with the offense. Brown found his man Devon Williams for a 31-yard touchdown strike to give Oregon its first lead of the game just before the half.

Oregon’s defense picked up right where they left off to begin the second half, forcing a three-and-out and getting the ball back to the offense. Travis Dye went to work on the Ducks’ first possession of the second half, rushing for 68 yards on five carries, as Oregon marched down the field to extend their lead on a 2-yard touchdown run by Anthony Brown Jr.

17-9 Oregon, and it was beginning to feel like the Ducks had found their stride.

Another stop by the Oregon defense towards the end of the third quarter, resulted in a punt and a nice return by Mycah Pittman who set up the Ducks with great field position at the Washington 22 yard line.

It only took two plays for Oregon to find the end zone once again, this time on a 19-yard run by Travis Dye as the first few second of the fourth quarter ticked off the clock.

Washington hadn’t been able to get much going offensively all night, but when they needed it the most the Huskies put together an 11-play, 75-yard drive to pull within one score of Oregon. Sean McGrew ran it in from 2 yards out on 3rd & goal to bring the score to 24-16 Oregon with 11:13 left to play.

Oregon needed a long statement drive to put the game away and close to books on this season’s rivalry game, and that’s almost what they got. The Ducks marched down the field on 11 plays to get inside the Washington 10 yard line for 1st & goal with 3:00 left on the game clock. Travis Dye nearly punched it in for the knockout blow, but Oregon suffered two 15-yard penalties which backed them up all the way to the Washington 37 yard line.

At this point Oregon was now out of field goal range and were forced to punt the ball back to Washington who had all three timeouts remaining and a couple minutes to work with, down just 8 points.

Oregon’s defense stood tall once again, forcing three straight incompletions by quarterback Dylan Morris. The Huskies were faced with a 4th & 10 at their own 10 yard line, and to the surprise of nearly everyone in the building, head coach Jimmy Lake decided to send out the punting unit.

The decision completely backfired, as Washington’s long snapper sailed the ball over Race Porter’s head for an Oregon safety. The Ducks now led 26-16 and would get the ball back to close things out.

Oregon moved the ball down to the Washington 1 yard line and had a chance to pound it in for a final touchdown if they wanted. However, Mario Cristobal kept it classy and decided to let the clock run out as Oregon secured the 26-16 win over Washington on a rainy and windy night at Husky Stadium.