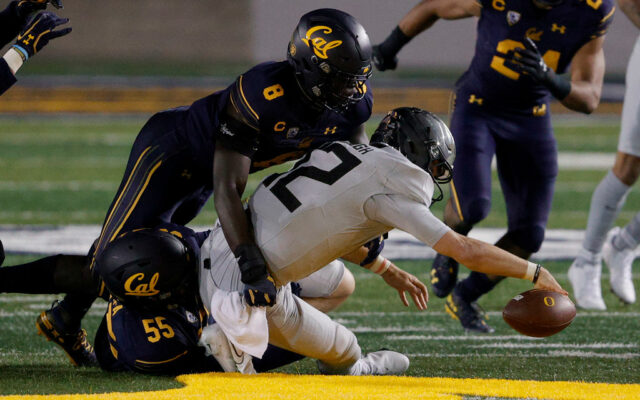 Oregon’s struggles continued for a second week on Saturday against Cal.

The Ducks lost the turnover battle 2-0, but that hasn’t automatically killed them earlier this year.

On the flip side, the Ducks won the turnovers handily against UCLA (4-1), yet they barely won that game 38-35.

Against Oregon State, the Ducks lost the turnover margin 3-0, and two of the giveaways happened late resulting in the 41-38 loss. This week against Cal, both fumbles came at horrible times.

Before the turnovers though, Oregon decided to go for it on fourth down — down 21-17 — from the Golden Bears 18.

Now, I’m all for aggressive play-calling and risking it on fourth down, especially fourth-and-1. Obviously, hindsight is 20/20 so it’s easy for me to “criticize” the call now. I’m not criticizing the decision, but the play and the execution? Yeah, I am.

On its face, it makes sense to go for it. At the same time, maybe don’t call a run to a guy who struggled all night. CJ Verdell is not the problem, but he wasn’t the solution on Saturday. He had six carries for eight yards.

Anyway, not getting the conversion is fine because Cal fumbled on the next possession. The real problem was Oregon’s first turnover came later in ensuing drive when Kuony Deng forced a Tyler Shough fumble.

So, just an inopportune moment for the Ducks. It’s okay though because the defense managed to force a punt.

Unfortunately for Oregon, they follow with a three-and-out of their own.

The Ducks still had life when they forced a turnover on downs with two minutes left.

Shough, looking to redeem himself after the turnover, drove the Ducks down the field to Cal’s 38. Then, he found Johnny Johnson III, but Deng showed up again for the Golden Bears.

Even with two losses, Oregon is still alive for the Pac-12 Championship. The Ducks hold the tiebreaker over Stanford, who also has two losses.

The Cardinal did Oregon a favor on Saturday and beat Washington, the Huskies first loss.

With a win on Saturday against UW, Oregon would represent the Pac-12 thanks to all the tiebreakers. Oregon would own both tiebreakers against both UW and Stanford, so it doesn’t matter what the Cardinal do against Oregon State.

Oregon hosts Washington on Saturday at 1 p.m. on FOX.