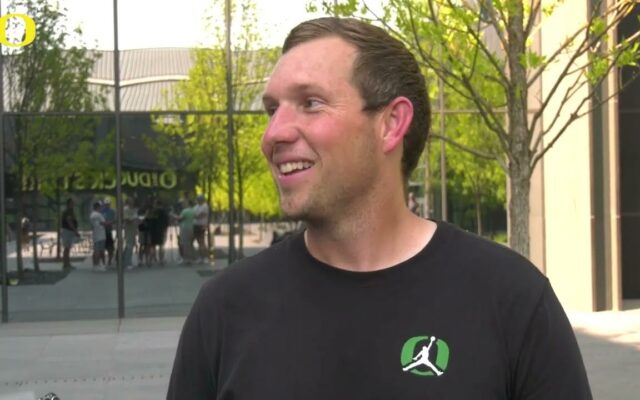 Oregon offensive coordinator Kenny Dillingham has been announced as one of 15 semifinalists for the 2022 Broyles Award, which honors college football’s top assistant coach.

In his first season at Oregon, Dillingham has directed one of the nation’s most explosive offenses and has helped quarterback Bo Nix play his way into the Heisman Trophy conversation. Oregon ranks third nationally in total offense (511.2 YPG) and fourth in scoring offense (40.2 PPG), and the Ducks are one of just three teams to score 40-plus points at least eight times this season. UO is also one of just two teams (Ohio State) in the top 20 nationally in both rushing offense (12th, 223.0 YPG) and passing offense (18th, 288.2 YPG). The Ducks rank second in the FBS in first downs per game (26.9) and are tied for fifth in plays of 10-plus yards (203).

Nix has been phenomenal for the Ducks after transferring from Auburn to reunite with Dillingham, who was his offensive coordinator in 2019 as a true freshman. Nix is tied for the FBS lead with 40 total touchdowns, and his 14 rushing touchdowns are tied for first among all Pac-12 players and lead all FBS quarterbacks. The quarterback leads the nation with a 72.2 completion percentage, and he is one of just three FBS QBs with at least 3,000 passing yards and 500 rushing yards. Nix is also one of just three players to have double-digit touchdowns both passing and rushing this season, and he is the only quarterback with three games of three rushing TDs. Nix ranks eighth nationally in total yards of offense per game (324.5), and third in total yards per play (8.52).

Dillingham’s offense has been protected by the nation’s top offensive line, which leads the country with just three sacks allowed. Oregon is the only team in the nation to give up fewer than seven sacks on the season. Oregon has rushed for at least 200 yards six times with three 300-yard performances, and the trio of Bucky Irving (2nd, 6.59), Nix (5th, 6.28) and Noah Whittington (10th, 5.99) all rank in the top 10 in the Pac-12 in yards per carry.

Receiver Troy Franklin has also enjoyed a career year in his first season working with Dillingham, ranking sixth in the Pac-12 with a team-high 789 receiving yards on 48 catches with seven touchdowns. Oregon’s tight ends have seen an up-tick in production under Dillingham as well – the Ducks are one of just five teams to have a touchdown from four different tight ends, and they rank third in the nation with 11 total touchdowns from the tight end group.