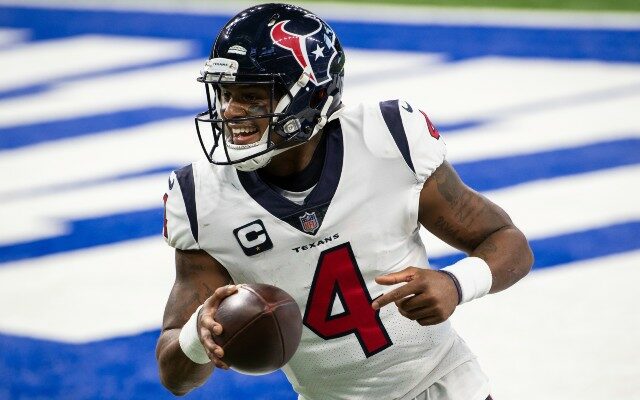 Deshaun Watson will reportedly be traded to the Cleveland Browns, waiving his no-trade clause from Houston, and will sign in Cleveland for a new deal that includes $230 Million fully guaranteed, the largest such figure in league history (AP Images)

Another major domino has fallen in surprising manner in the NFL.

In a stunning twist, Deshaun Watson has told the Texans he will waive his no-trade clause to approve a trade to… the Cleveland Browns.

In return, Houston will get three first-round picks and two additional picks.

Earlier in the week, the Browns reportedly were informed by Watson’s camp they were out of the running to acquire the star quarterback in a trade.  Most recently, the Atlanta Falcons and New Orleans Saints were widely reported the frontrunners to trade for Watson.  But Thursday afternoon, it was Cleveland who claims the signal-caller.

Watson was cleared last week by a grand jury of any criminal charges relating to twenty-two women who have accused him of sexual misconduct and harassment during massage sessions.  Those remain active civil cases awaiting resolution.

The NFL says the transaction to Cleveland does not impact the league’s ongoing investigation into Watson’s case.