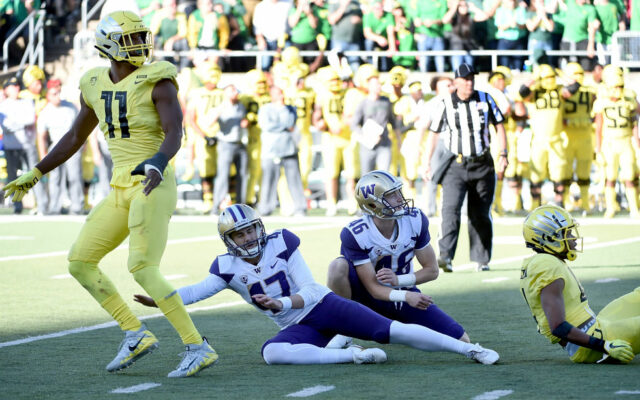 GENE, OR - OCTOBER 13: Linebacker Justin Hollins #11 of the Oregon Ducks, place kicker Peyton Henry #47 of the Washington Huskies, punter/holder Race Porter #46 of the Washington Huskies and cornerback Thomas Graham Jr. #4 of the Oregon Ducks watch as Henry's field goal attempt to win the game misses in the final seconds of the regulation at Autzen Stadium on October 13, 2018 in Eugene, Oregon. The Ducks won the game in overtime 30-27. (Photo by Steve Dykes/Getty Images)

It’s not Oregon-Washington week until we get Softy on the BFT.

Dave Mahler, radio host at KJR in Seattle, joined John Canzano on the Bald Faced Truth on Thursday to sound off on Ducks-Huskies.

Softy knows the Huskies are outmatched this Saturday at Autzen, but he blames Jimmy Lake.  He also rips Mario Cristobal, Ducks fans, and USC and UCLA.

Softy is known for his infamous ‘C’Mon Peyton!’ rant on Facebook Live during the 2018 Oregon-Washington game, that featured a missed 37-yard field goal at the end of regulation by Huskies kicker Peyton Henry.  The Ducks went on to win the game in overtime.

Listen to the interview in its entirety here.