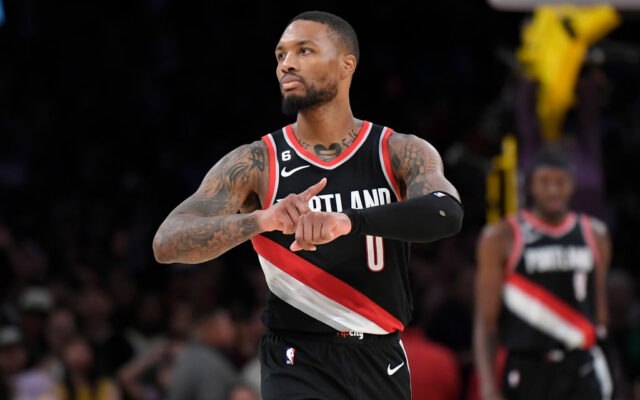 LOS ANGELES, CA - OCTOBER 23: Damian Lillard #0 of the Portland Trail Blazers celebrates as he points to his wrist after scoring a three-pot basket in the closing seconds of the game against Los Angeles Lakers at Crypto.com Arena on October 23, 2022 in Los Angeles, California. NOTE TO USER: User expressly acknowledges and agrees that, by downloading and or using this photograph, User is consenting to the terms and conditions of the Getty Images License Agreement.(Photo by Kevork Djansezian/Getty Images)(Photo by Kevork Djansezian/Getty Images)

After a 3-0 week where the Blazers were underdogs in all 3 games.  Trail Blazers star point guard, Damian Lillard was named NBA Western Conference Player of the Week.  Dame averaged 34.0 points, 5.3 rebounds and 4.3 assists on the week including hitting a classic step back three pointer against the Lakers with time running out to give the Blazers a 2 point lead with just over 10 seconds left.  It wasn’t all just the offense as the Blazers defense is ranked 5th in defensive rating so far this season.  The schedule continues to be tough.  They play the Nuggets on Monday night where the Nuggets are favored on the road.  I think it’s safe to say that Damian Lillard is healthy once again.