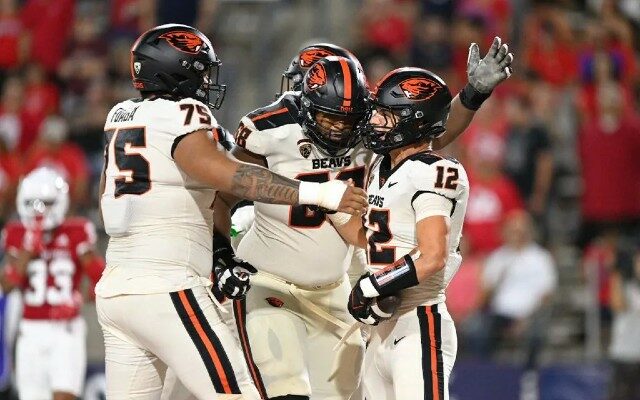 A two-yard touchdown run by Jack Colletto on the final play of regulation gave the Oregon State Beavers a 35-32 road win at Fresno State, the first for the Beavers over the Bulldogs in California.

Beavers head coach Jonathan Smith changed his mind after initially sending out the field goal unit for a would-be game-tying field goal that would have sent the game to overtime.  Fresno State head coach Jeff Tedford called a time out to seemingly ice OSU kicker Everett Hayes, who knocked through the field goal anyway.  But after the time out, Smith reversed course and sent the offense back on the field, calling Colletto’s number.

The gamble paid off, Colletto ran to the right for the score, and Oregon State earned its first non-conference road win since 2014, which was also the last time they started 2-0 on the season.  The Beavs started 3-0 that year, and have a chance to get to 3-0 this year when they play host to FCS foe Montana State at Providence Park in Portland on Saturday.

“It means a ton,” head coach Jonathan Smith said of the last-second victory.  “These games are long.  That’s a good team we just played.  For us to keep battling, and finding a way, there’s a bunch to clean up, but the guys never gave up, and had an opportunity to win at the end, and did it.”

Oregon State received 42 votes for the AP Top-25 in the Week 3 poll released Sunday.  They take on Montana State in Portland, Ore. on Saturday, kickoff set for 5:00 p.m. on Pac-12 Network with Jordan Kent and Nigel Burton on the call.

The Beavers will then move into Pac-12 conference play the following week, hosting Lincoln Riley and No. 7 USC at Reser Stadium.  That game will be a 6:30 p.m. start, televised on Pac-12 Network, it was announced Monday.