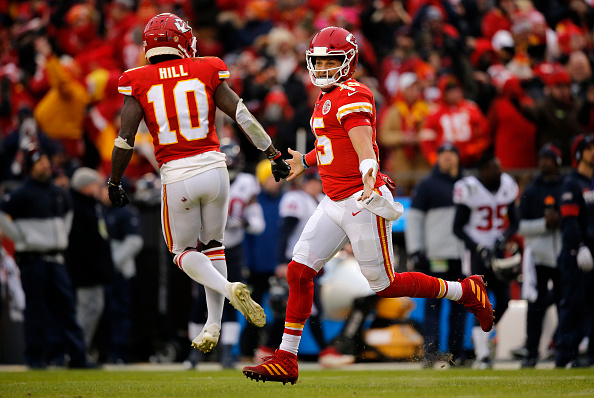 As 10-point underdogs, not many people gave the Texans a chance in this game. However, on the opening possession of the game, Deshaun Watson found Kenny Stills for a long 54-yard touchdown stike to give Houston an early 7-0 lead at Arrowhead Stadium.

Patrick Mahomes and the Kansas City offense took the field for their first possession, but were shut down on three straight plays. The Chiefs lined up to punt the ball away, but Barkevious Mingo made a huge play blocking the punt while teammate Lonnie Johnson Jr. scooped it up and ran it back for the score.

After just five minutes in the first quarter, Houston took a 14-0 lead and stunned the home crowd.

Kansas City’s second possession began to look eerily similar to the Baltimore Ravens struggles on Saturday night. Dropped passes on back-to-back drives, forced the Chiefs to give up possession.

As the first quarter was coming to a close, the Texans punted the ball away trying to pin the Chiefs deep in their own territory. Tyreek Hill muffed the punt and Houston recovered the ball inside their own 10 yard line. Watson took advantage with a touchdown pass to Darren Fells.

All of the sudden the scoreboard showed the Texans up 21-0 on the Chiefs, end of the first quarter.

Houston would extend their lead to 24-0 after a Fairbairn field goal. Then Mecole Hardman gave the Chiefs a lift they needed, returning the ensuing kickoff to the Texans 42 yard line. Later in the drive, Mahomes found Damien Williams for a 17-yard touchdown pass out of the backfield.

Kansas City’s defense made a crucial stop on the Texans’ next possession. On 4th down, Houston decided to try a fake, but the Chiefs sniffed it out and were able to stop them before the line to gain. The stop set up Mahomes and the offense at the Houston 33 yard line.

A pass interference call created a first and goal opportunity for the Chiefs offense. Mahomes made the most of it with a 5-yard touchdown pass to Travis Kelce, cutting the Houston lead to 24-14.

Chaos would continue as Texans kick returner DeAndre Carter coughed up the football on the kickoff. Kansas City would set themselves up with first and goal once again. Patrick Mahomes found his man Kelce once again for a touchdown strike, and just like that we had a 24-21 ball game. Three Chiefs touchdowns were scored in just over three minutes of play.

Patrick Mahomes would go on to throw his fourth touchdown pass of the second quarter, giving the Chiefs a 28-24 lead going into halftime. Kansas City would also received the ball to begin the second half.

The Chiefs first possession of the second half would be no different than what they had done all second quarter. Patrick Mahomes led the offense down the field, using his legs on multiple occasions to pick up first downs. The offense found themselves on the Texans’ 1 yard line, before Damien Williams punched it in to extend their lead to 34-24. Colquitt would miss the extra point following the touchdown.

At this point it seemed like the avalanche of Chiefs momentum would never stop. The Texans offense was forced into a three-and-out on their first possession of the second half, and shortly after the Chiefs would begin another scoring drive.

This time, Mahomes led the offense 77 yards on just six plays. Damien Williams scored his third touchdown of the game on a 5-yard run. Kansas City would lead 41-24, after scoring 41 unanswered points.

Both teams would trade scores after that. Deshaun Watson capped off a 75-yard drive with a 5-yard touchdown run to close the gap to 10 as the third quarter came to a close. Patrick Mahomes made quick work on their next possession, going 72 yards on just four plays. Mahomes finished the drive off with his 5th touchdown pass of the game, finding Blake Bell for his first touchdown all season.

Just a minute into the final quarter, Watson and the Texans offense had possession down 48-31.

Kansas City’s defense stopped Houston on fourth down, giving the ball back to the Mahomes and company. The Chiefs would add a field goal to bring the score to 51-31, and desperation time would continue for the Texans who had struggled on offense all game since the opening quarter.

The Chiefs defense would stop Watson and the Texans on their next two possessions to secure the 51-31 victory, and punch their ticket to the AFC Championship. It was the first time in NFL Playoff history that a team won by 20+ points after trailing by 20+ points in a game.

The Kansas City Chiefs will host the Tennessee Titans in the AFC Championship game next weekend.