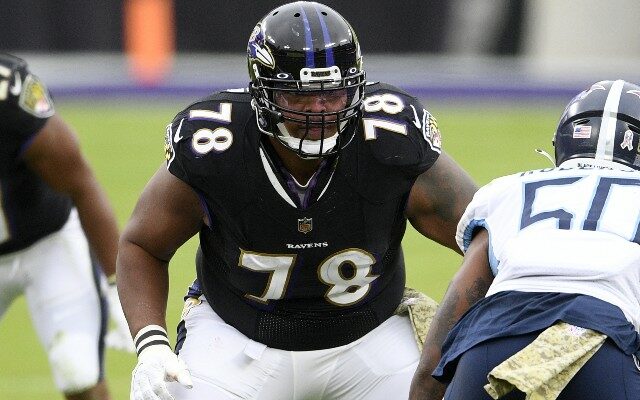 The Kansas City Chiefs made a major acquisition to bolster their offensive line on Friday, involving Pro Bowl offensive tackle Orlando Brown, Jr. from the Baltimore Ravens with additional draft picks going between the two teams.  ESPN’s Adam Schefter was first to report the deal.

The Chiefs get Brown, and trade their first-round pick in this year’s NFL Draft to Baltimore (No. 31 overall).

In addition to trading Brown, the Ravens send KC their second-round pick in this year’s draft (No. 58 overall) and a 2022 6th Round pick.

Brown is one of only four offensive tackles to have made the Pro Bowl in each of the last two seasons, along with Green Bay’s David Bakhtiari, New Orleans’ Terron Armstead, and Houston’s Laremi Tunsil.

It’s a big move for Kansas City in response to their O-Line woes that cost them a chance to be competitive in their Super Bowl 55 loss to the Tampa Bay Buccaneers.  The Chiefs have since made a number of moves on their line in addition to this Brown trade, including free-agent signings of former Ducks and Bears vet Kyle Long, former Patriots guard Joe Thuney, and former Rams center Austin Blythe.

Kansas City is also expected to have guard Laurent Duvernay-Tardiff back in the mix at right guard, after Duvernay-Tardiff chose to opt-out of the covid-affected 2020 season.  At right tackle, KC projects to have former OL starters Mike Remmers and Nick Alegretti in the mix.

Baltimore now has two first round picks in this year’s draft at No. 27 and No. 31 following this trade with the Chiefs.