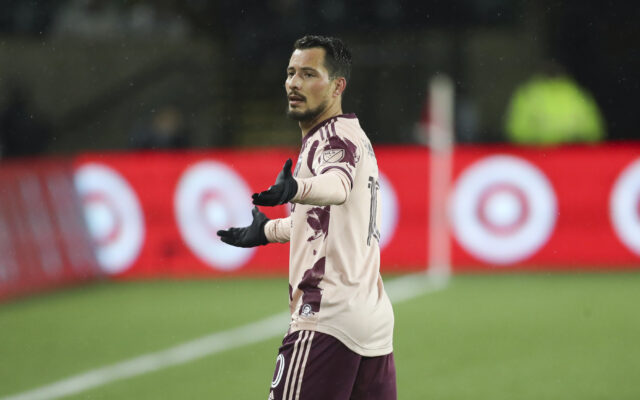 The Portland Timbers fall to 12th place in the Western Conference after losing 3-1 to the LA Galaxy on Sunday afternoon at a windy Providence Park.

After drawing with Orlando last week Portland was hungry to take all-three points even looking the stronger side in the early actions of the match.

After the strong opening push, the game completely shifted the Galaxy’s way when Javier ‘Chicharito’ Hernandez neatly tucked away a close-range effort with his right foot in the 9th minute. Just eight minutes later LA capitalized on another break; a low cross ricocheted off Timber’s defender Bill Tuiloma for an unfortunate own-goal.

The Timbers fought hard for a goal late in the half to steal momentum before the break but it only ended up worse as Pablo Bonilla was disciplined with a straight red card for a high shove after the whistle. Bonilla being sent off three minutes into first-half stoppage time marked the third Timbers fullback to be sent off with a red in the last six games.

Portland grabbed a point from a man-down situation last week against Orlando City, they looked on their way to doing the same Sunday when Bill Tuiloma scored a perfect free-kick in the 51st minute.

Although a center-back, Tuiloma now has five goals in his last six matches for club and country.

The positive momentum was short-lived as Chicarito completed the brace in the 59th minute dragging Timbers Keeper Alijaz Ivacic against his momentum on a low shot.

Despite LA going to 10-men when Marco Delgado got a second yellow card in the 61st minute, Portland didn’t look menacing in the final half-hour of the game. The loss now sees Portland winless in their last three.

Portland hits the road next weekend visiting Vancouver for the first 2022 match with the Whitecaps on Saturday.