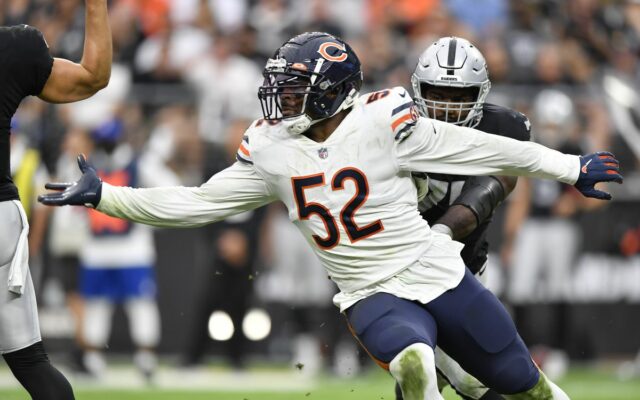 Bears GM Ryan Poles has made his first major move trading away pass-rusher Khalil Mack to the Chargers in exchange for a 2022 2nd-round pick and a 2023 6th-round pick.

Compensation update: Chargers are expected to send 2022 second-round pick and a 2023 sixth-round pick to the Chicago Bears in return for Khalil Mack, per sources.

The LA Chargers are absorbing the entirety of Khalil Mack’s remaining three-year, $63.9 million contract. With the Chargers star QB Justin Herbert still on his rookie deal, the Chargers can make ambitious moves that eat up the salary cap.

When Mack was on the field for Chicago he was a monster, most notably leading a Bears to an NFC North crown in 2018. Mack, now 31 years old, only played seven games last season through injury issues but if the Chargers can keep him healthy, the combination of Joey Bosa and Khalil Mack will be dangerous.

For Chicago, the pick-return isn’t ideal considering what they gave up for Mack when they traded for him from the Raiders. Nonetheless, freeing up an extraordinary amount of cap space will allow Poles and Bears management to build around young-QB Justin Fields.