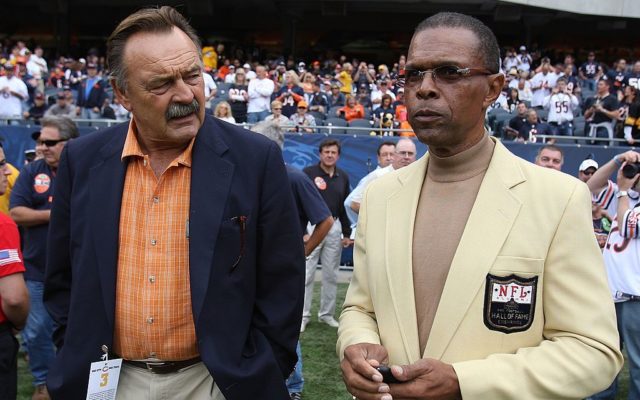 Sayers is considered one of the best backs in NFL history, despite a career cut short by knee injuries.

His quote “Just give me 18 inches of daylight. That’s all I need,” is still legendary. Also, he wasn’t lying. After all, he was known as the “Kansas Comet.”

“Football fans know well Gale’s many accomplishments on the field: a rare combination of speed and power as the game’s most electrifying runner, a dangerous kick returner, his comeback from a serious knee injury to lead the league in rushing, and becoming the youngest player inducted into the Pro Football Hall of Fame,” Bears Chairman George H. McCaskey said in a statement. “People who weren’t even football fans came to know Gale through the TV movie ‘Brian’s Song,’ about his friendship with teammate Brian Piccolo. Fifty years later, the movie’s message that brotherhood and love needn’t be defined by skin color, still resonates.

“Coach [George] Halas said it best, when presenting Gale for induction at the Hall of Fame: ‘His like will never be seen again.’

“On behalf of the McCaskey family, we offer our sincerest condolences to [his wife] Ardie and the entire Sayers family.”

Sayers was inducted into the Pro Football Hall of Fame in 1977 at age 34. He was the youngest player ever inducted.

Sayers spent all seven years of his career in Chicago. Even in that short time, he was dominant.

He led the league in rushing twice, and Sayers averaged 5 yards per carry for his career. Overall he finished with 4,956 rush yards and 39 touchdowns. Also, Sayers once scored six touchdown in one game.

Sayers actually led the league in rushing during the 1969 season just one year removed from tearing his ACL and MCL in his right knee. Unfortunately, he suffered a major injury in his left knee in 1970, and Sayers retired in 1971.

He was also a great return man. He had seven return TDs (five kick, two punt), while he averaged 30 yards a kick return and 14.5 yards per punt return.

Hall of Famer Dick Butkus: “Will miss a great friend who helped me become the player I became because after practicing and scrimmaging against Gale I knew I could play against anybody. We lost one of the best Bears ever and more importantly we lost a great person.”

Sayers: “I played as hard as I could.”

Five years ago on the 50th anniversary of Gale Sayers 6-TD game, @JeffJoniak sat down with the legend himself to reflect on one of the most memorable performances in NFL history. A must watch as we remember #40. pic.twitter.com/EBpI7M8vkt