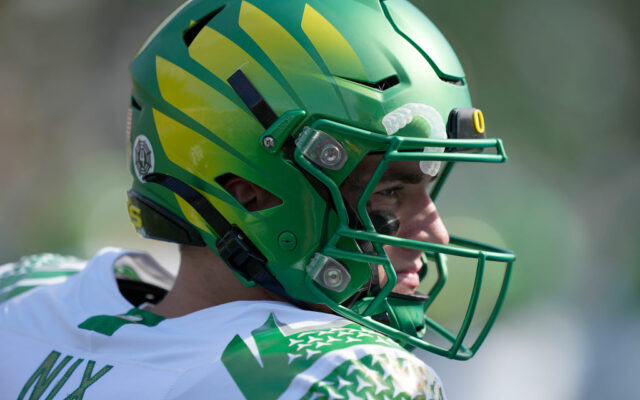 BERKELEY, CALIFORNIA - OCTOBER 29: Bo Nix #10 of the Oregon Ducks looks on against the California Golden Bears during the first quarter of an NCAA football game at FTX Field at California Memorial Stadium on October 29, 2022 in Berkeley, California. (Photo by Thearon W. Henderson/Getty Images)

The Oregon Ducks debuted at No. 8 in the first College Football Playoff rankings for the 2022 season, released Tuesday.

Oregon was ranked No. 8 in this week’s AP Poll after holding steady to that ranking following a 42-24 road win at Cal last week.  The Ducks are on the road again this Saturday, again a heavy favorite, taking on the 1-win Colorado Buffaloes (1-7, 1-4).

The Tennessee Volunteers are No. 1 in the CFP Rankings, followed by Ohio State (No. 2), reigning national champion Georgia (No. 3) and Clemson (No. 4).

The full rankings are below.

Where does your team rank? pic.twitter.com/BI1KBAcL2Y