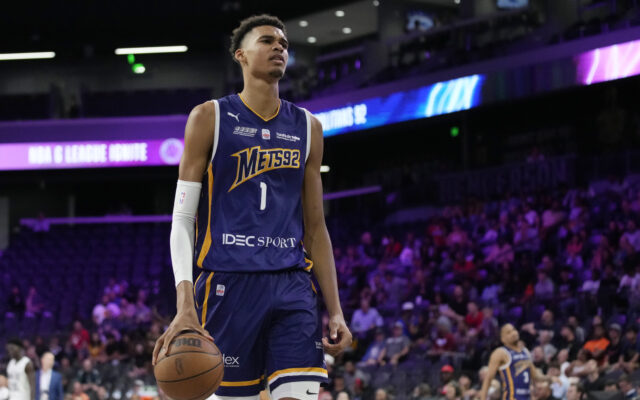 The Portland Trail Blazers kick off their 2022-23 season Wednesday night against the Sacramento Kings. The team is saying all the typical things that a mediocre team would after a brutal season – a commitment to defense, internal growth, connectivity.

In his most recent column, our own John Canzano isn’t buying the improvement that the Trail Blazers are selling, and things the team should get in the mix for international sensation Victor Wenbanyama:

The NBA season opens for Portland’s NBA franchise tonight at Sacramento. The over/under win total for the Blazers: 40.5 victories. That feels generous given the ugly preseason and so many questions surrounding the roster. I’m left thinking the better outcome is to get off to a slow start, stumble into the February trade deadline, shed talent, lose a pile of games, and aim for one of the top-two NBA Draft picks.

Wembanyama is 7-foot-5 with an eight-foot wingspan. He’s a walking mismatch, who can handle the ball and create his own shot. We haven’t seen a player quite like him since — really, ever. The buzz around Shaquille O’Neal and Yao Ming at that same age was about size and strength. Wembanyama is big, but it’s his skills that make him special.

Canzano goes on to make the point that, even if Portland can’t land the top-pick, there is a pretty solid consolation prize with 2023’s second overall pick:

The other player NBA scouts are buzzing about is Scoot Henderson. He’s 6-foot-2 with a great first step and a killer instinct. Think: Ja Morant meets Derrick Rose. Henderson, a guard, has exceptional poise, skills and body control. But it’s his aggressive, monomaniacal on-court mentality and inner drive that make him special.

The Trail Blazers will have a difficult time “competing” with the likes of the Jazz, Spurs, Rockets, Thunder, and Pacers for the worst record in the league, but based on what we’ve seen over the last season-plus, it could be even more different fielding a contending team with the current crop of supporting talent, an aging Damian Lillard, and an unproven head coach in Chauncey Billups.

The Portland Trail Blazers are stuck in the middle, one of the toughest places to be in the NBA. But the league is a business. Is it better to bottom out and hope to rebuild a winner? Or is fielding a semi-competitive team surrounding a massively popular superstar (and all the eyeballs and revenue that goes along with that) the better play?

Read the full column at johncanzano.com