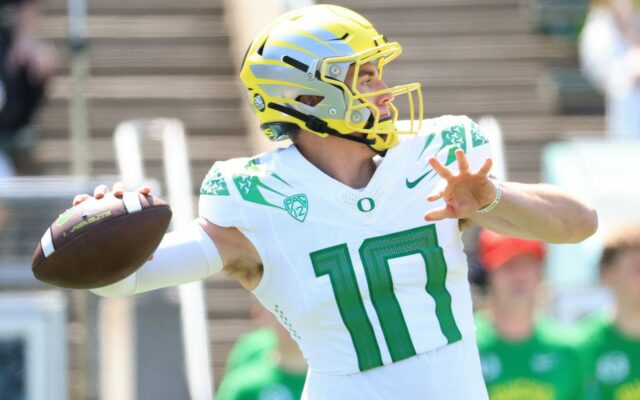 John Canzano (Host of the Bald Faced Truth on 750 The Game, Weeekdays 3-6 p.m.) wrote a column on JohnCanzano.com with his primary takeaways from the Oregon Ducks spring game at Autzen Stadium over the weekend.

Canzano says the main conclusion he drew from watching the Ducks in action was that the quarterback position, and arguably the entire team, belong to transfer Bo Nix… at least for the the time being.

Canzano elaborated on the quarterback competition and his hierarchy coming out of Saturday, and also gave his impression of watching Dan Lanning and his coaching staff.  JC said the team looked “organized, focused, and played with purpose.”

“Lanning is 35 years old and is a first-time head coach. If you’re among those who wondered if Lanning knows how to organize a practice and a scrimmage, you can rest easy. So far, the new guy looks like he knows what he’s doing.”

Check out Canzano’s full column on JohnCanzano.com right here, and tune in to the BFT weekdays 3-6 p.m. on 750 The Game.