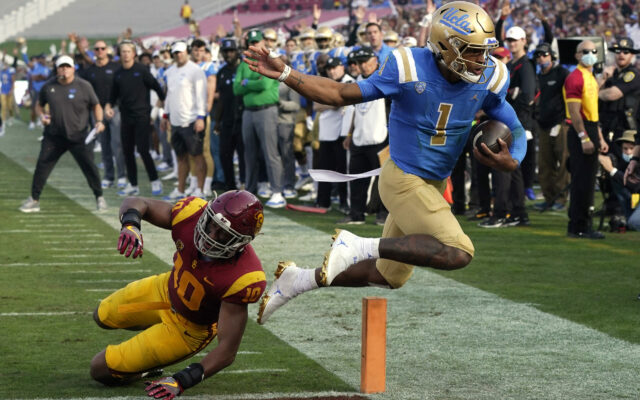 FILE - UCLA quarterback Dorian Thompson-Robinson, right, runs the ball in for a touchdown as Southern California linebacker Ralen Goforth defends during the first half of an NCAA college football game, Saturday, Nov. 20, 2021, in Los Angeles. Thompson-Robinson is back for a fifth season as UCLA's quarterback when many, including coach Chip Kelly, thought he would leave for the NFL. (AP Photo/Mark J. Terrill, File)

John Canzano has been on fire with his against the spread Pac-12 picks each week.

After two double-digit underdogs won outright on the road, Canzano tries to determine if the original trend of home favorites dominating will return in this 12th week of the college football season.

Listen as Canzano goes around the conference with Steven & Judah with their Pac-12 picks, including UCLA-USC, Oregon-Utah, Oregon State-ASU, and more.