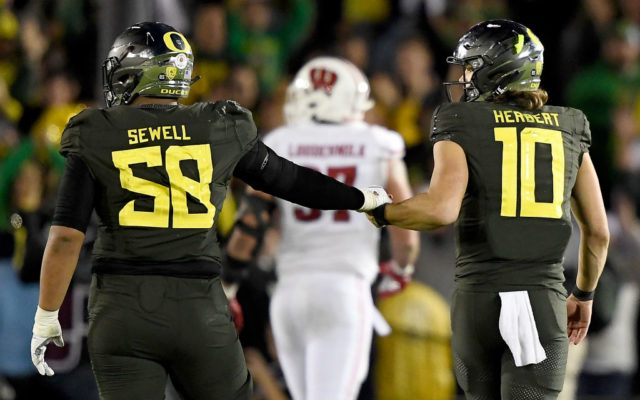 With the NFL Draft starting on Thursday, our own John Canzano answered the questions we keep hearing about Justin Herbert at the next level and Canzano broke down why he thinks Herbert to the Los Angeles Chargers is the right fit.

The questions I keep getting:

Does Herbert have the physical tools? Sure. He’s big, tall and strong. He has a terrific arm, better than advertised feet, and there were occasions in his time at Oregon where he made brilliant throws and good decisions. But I never did see complete football games where I left in awe of his ability. It was more about him performing consistently well with what he had to work with.

Does Herbert have the brain? Absolutely. Anyone who has ever talked with him knows he’s intelligent, studious and thoughtful. He was a Biology major with a 4.0 grade-point average. His Wonderlic score: 39. Higher than LSU’s Joe Burrow (34) or Alabama’s Tua Tagovailoa (19) and second-best among all quarterbacks in this draft.

Does he have the leadership gene? Probably. I think. Maybe. I didn’t see Herbert as much of an outspoken and vocal leader on the field during games. Then again, some quarterbacks are inwardly focused and still obviously hyper-competitive. I’m not sure a quarterback needs to be as demonstrative on the field as he just needs to be effective and make good decisions.

Herbert to the Chargers at No. 6 overall — I like. Just not for the reasons most think. The Chargers need their quarterback of the future, but they also trust veteran Tyrod Taylor. Taylor, not Herbert, would be the starter next season under the ideal scenario. Herbert could sit some as a rookie, pressure off, grow into the job and not become another draft casualty.