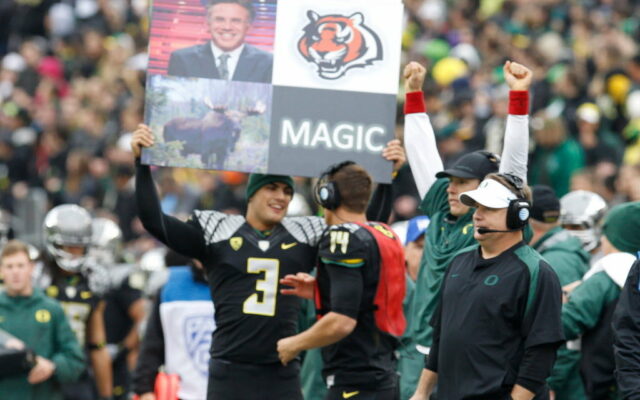 Columnist and radio show host John Canzano weighed in with a column about a variety of fun subjects today. Among them, former Oregon Ducks coach Chip Kelly and his sign game.

You remember the giant signs on the sidelines at UO games?

Canzano learned that the signage was nothing more than a diversion, with no meaning.

The posters featured a variety of photographs, ranging from symbols to animals to words. They included people, too. ESPN broadcasters Lee Corso and Neil Everett made appearances. I even looked down from the press box one day at Autzen Stadium and saw my column mugshot printed on one of the cards.

They meant nothing, folks.

Former Oregon receiver Keanon Lowe provided the details to Canzano. Said Lowe: “The truth is, the cards meant nothing. It was all hand signals and verbal. They cards were just a diversion. You gotta give it to Chip. He thought of that. Who thinks of that?”

It’s a fun read and gives some cool insight into the Ducks’ operations during that era.