Can Jamal Adams Fill the Earl Thomas-Sized Hole in the Seattle Defense? 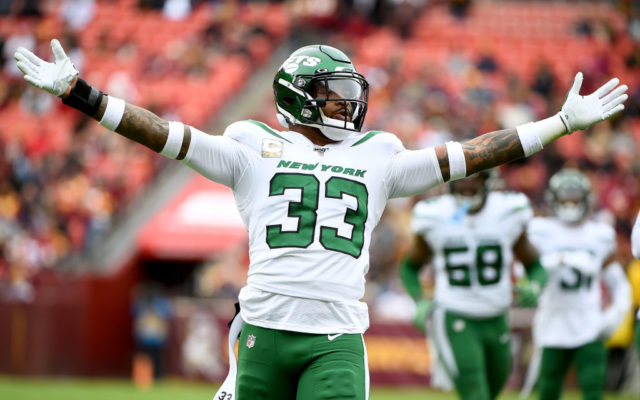 Photo by: Will Newton/Getty Images

In case you somehow missed it on Saturday, the Seattle Seahawks sent three draft picks (2021 1st-round, 2021 3rd-round, 2022 1st-round) and starting safety Bradley McDougald to the New York Jets for Jamal Adams and a 2022 4th-round pick.

Adams is scheduled to fly to Seattle for his physical on Monday, according to ESPN’s Adam Schefter.

Almost all of Seahawks Twitter loved the move, and how could you not? He can literally do it all.

ESPN’s Mina Kimes brings up an interesting thought, how will the Seahawks implement Adams?

According to @ESPNStatsInfo, Jamal Adams has actually lined up for more snaps at LB/DL than safety since entering the league.

Very curious to see how Seattle deploys him….

The claim by Kimes is backed up with heat maps provided in two tweets from ESPN colleague Bill Barnwell. The red spots show where Adams lined up in 2019 and how Seattle placed Kam Chancellor in 2016.

As you can see, the two safeties were used very similarly, so could Adams be the next Bam-Bam? Or better yet, a long-awaited replacement for Earl Thomas?

Since ET missed his first games due to injury in 2016, the Seahawks started preparing for the end of the Thomas era in Seattle. They signed McDougald, now headed to NYC, to a one-year deal in the 2017 offseason after Thomas’ first hamstring injury.

Then, in the 2017 NFL Draft they spent two picks on safeties, Delano Hill in round three and Tedric Thompson in round two. In three seasons, Hill has played sparingly in 40 games (six starts) and only gathered 54 total tackles. Meanwhile, Thompson has played in fewer games (29 total, 16 starts) and collected 80 tackles. He also turnovers forced between the two; three interceptions and a forced fumble.

Thompson was waived last March, while Hill signed a four-year deal with Seattle in June 2017.

McDougald played well for the Seahawks in place of both Chancellor and Thomas during their injured periods. He earned a three-year deal with Seattle in March 2018.

Remember, the Seahawks signed Chancellor to a three-year deal before the 2017 season, and then he only played in 19 games over a two-year span. So, Seattle didn’t want to pay Thomas heading into 2018.

After Thomas sat out all of the 2018 preseason because he wanted a new contract, he returned just prior to Week 1. Thomas was ultimately injured in Week 4, and subsequently flipped Pete Carroll and the Seahawks sideline the bird. The gesture brought an unceremoniously sad ending to the Thomas era with Seattle.

The Seahawks then drafted two more safeties (Marquise Blair and Oregon’s Ugo Amadi) in the 2019 draft. Seattle traded for Quandre Diggs in Oct. 2019, and he played in five games last year.

In total, the Seahawks have brought in 21 safeties to either the active roster or practice squad since Dec. 2016, according to spotrac.com. That feels kind of ridiculous.

Luckily for the Seahawks, a Diggs-Adams combination seems like the best safety tandem they’ve had since Chancellor and Thomas.

Is Adams Worth The Picks Traded?

Absolutely. The obvious caveat is he needs to stay healthy, but you can say that about any player who ever played in any professional sport, so keep that one to yourself.

Since John Schneider took over as Seahawks general manager in 2010, he has made eight first round draft picks. Only two, Thomas and Russell Okung, have been Pro Bowlers, and they were both taken in 2010.

Schneider is also known for trading back in or even out of the first round. So, the Seahawks won’t be picking in the first round of the next two NFL drafts to get Adams? I think it’s a win for Seattle who isn’t going sniff a Top 10 pick anyway as long as Russell Wilson is the quarterback.

In other words, what would you rather have? Two first round picks between 24-32 or a former No. 6 pick who still isn’t in his prime yet? Sign me up for Jamal Adams.