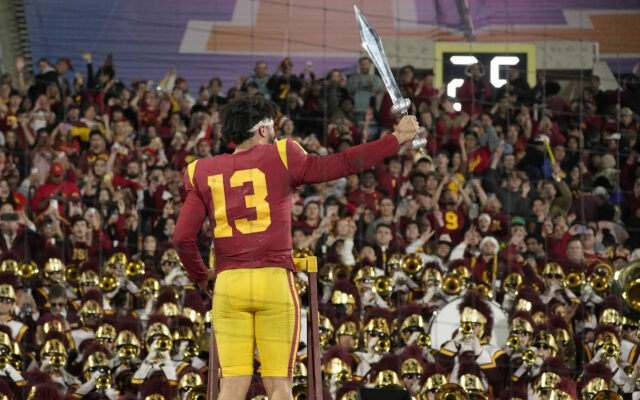 Caleb Williams and the USC Trojans are headed to the Pac-12 Championship Game.

USC edged cross-town rival UCLA on Saturday night at the Rose Bowl, 48-45.  USC finishes the conference campaign with an 8-1 Pac-12 mark, their lone defeat coming at Utah in October, 43-42.

The Trojans entered the week No. 7 in the College Football Playoff rankings, and are poised to move up following No. 5 Tennessee’s defeat at South Carolina.  The new CFP rankings come out Tuesday.

The Trojans can make their Vegas plans, officially, but their opponent is to be determined.  Oregon is the most likely opponent, and can punch their ticket with a victory at Oregon State on Saturday (12:30 p.m., ABC).  An Oregon State win could bring a 3-team tie into the picture for the second conference seed between Oregon, Utah and Washington.  Utah would be the likely benefactor of a three-team tie as long as UCLA beats California on Friday.  If Cal wins, Oregon State wins, and Washington beats Washington State in the Apple Cup, it will be the Huskies going to Vegas.

The Pac-12 Championship Game is Friday, Dec. 2nd at Allegiant Stadium in Las Vegas, a 5 p.m. kickoff, televised on FOX.