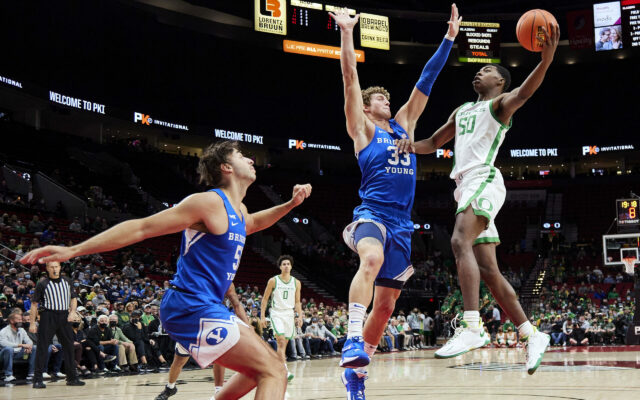 #12 Oregon was dismantled 81-49 to BYU at Moda Center during the P.K Invitational Tuesday night. It was Oregon’s worst loss since 2018 when Stanford crushed the Ducks 96-61 in Palo Alto.

Oregon did little to excite their Portland fan base in the opening 20 minutes, shooting a pultrude 5-26 from the field and looking discombobulated on offense. The last in P.K Invitational in 2019, Oregon beat a highly-ranked Memphis team coached by Penny Hardaway and future #2 pick James Weisman. Oregon would need a young Penny Hardaway the way BYU tore them up tonight.

Oregon Head Coach Dana Altman states every season there are 10 games you shoot great, 10 you shoot average, and 10 you shoot poorly. If you’re a Duck looking for a silver lining Oregon got one of those poor shooting contests out of the way.

Rough opening half for Oregon Basketball. Their lowest scoring half this season by 18 points. Guerrier leading the scoring for the Ducks with 6.

While the first half was disastrous, Oregon received a boost when former 5-star prospect N’Faly Dante checked into the game for the first time since tearing his ACL in December 2020. The big man produced just four points in nine minutes but seeing a healthy Dante on the court gives Oregon greater rim protection.

The second half was slightly more polished from Oregon, shooting 44% from the field while and still having hope early in the half. Nonetheless, BYU had a handful of plays from five blocks, a pair and-ones, and nine threes that was too much for Oregon to handle. The BYU fanbase was outnumbered yet the consistent B-Y-U chants and eruptions from Cougar scores made the Duck fans scatter early.

A 14 year-old fan hitting a free throw during a timeout was the loudest Duck fans have been able to get all night. BYU fans having an absolute blast at Moda after numerous big Cougar plays.

Ultimately, this is an Oregon team with top-10 talent but the Dana Altman transfer portal mastery will take time to gel with returning starters Will Richardson and Eric Williams Jr.

“They out worked us, they out prepared us… they got what they wanted all night,” said Altman.