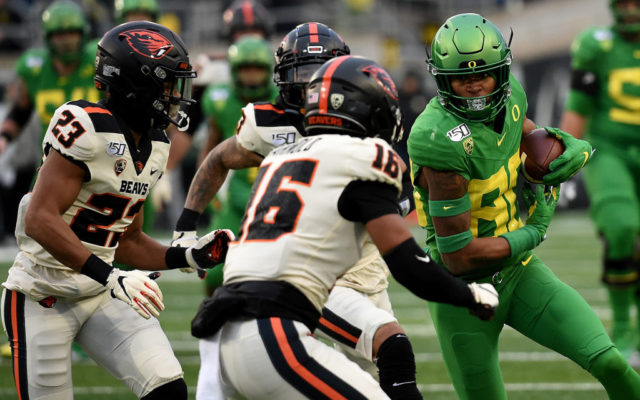 The University of Oregon and Oregon State each announced the two schools will no longer call their rivalry series the “Civil War”. A new name for the rivalry has not been chosen yet.

“While not intended as reference to the actual Civil War, OSU sports competition should not provide any misconstrued reference to this divisive episode in American history,” he said in the press release. “That we did not act before to change the name was a mistake. We do so now, along with other important actions to advance equal opportunity and justice for all and in recognition that Black Lives Matter.”

Beaver VP and Director of Athletics Scott Barnes acknowledged student-athletes, alumni and friends of the university have “questioned the use of the term Civil War in our rivalry series in recent years.”

He also added the school “initiated discussions” with Oregon State’s Student-Athlete Advisory Committee (SAAC) about the potentially “eliminating the name ‘Civil War'” from the rivalry.

Barnes says a large group of the Oregon State community, including alumni and student-athletes, will collaborate with UO to consider other names for “this historic rivalry.”

“I want to thank University of Oregon President Michael H. Schill and Athletic Director Rob Mullens for their collaboration in this process and look forward to working together to continue to highlight this outstanding rivalry,” said Barnes.

On the Ducks side, Mullens made sure to single out one Duck for starting the conversation at UO.

“Today’s announcement is not only right but is a long time coming, and I wish to thank former Duck great Dennis Dixon for raising the question and being the catalyst for change,” he said in the Oregon press release. “Thanks also to our current student-athletes for their leadership and input during this process. We must all recognize the power of words and the symbolism associated with the Civil War. This mutual decision is in the best interests of both schools, and I would like to thank Scott Barnes for his diligence as we worked through this process. We look forward to our continued and fierce in-state rivalry with Oregon State in all sports.”

Oregon President Schill also thanked student-athletes, past and present, for raising concerns about the usage of the Civil War name.

“We need to make this change to align the words and symbols we use around athletic endeavors with our shared campus values of equity and inclusivity. While the name of our annual game might change, it will absolutely continue to be one of the great rivalries in college sports,” he said.

The Ducks and Beavers are scheduled to play the 124th meeting in football on Nov. 28 at Reser Stadium in Corvallis. The rivalry ranks as the fifth highest in terms of most games played in a series. The men’s basketball series holds the collegiate record with 354 games played.