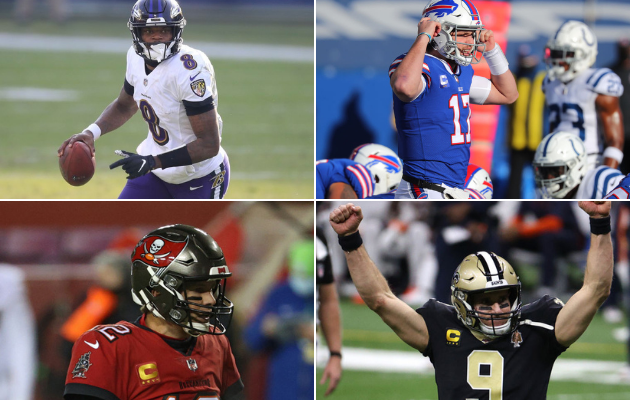 After Super Wild Card Weekend provided some surprising upsets, the NFL playoffs’ second round is set.

First, on Saturday, a battle of two teams that did not play this season: the LA Rams at the Green Bay Packers. In fact, the last time these two faced off was Oct. 28, 2018; the season LA went to the Super Bowl.

Since that game, Los Angeles missed the playoffs last season and snuck in this year, while Green Bay went to the NFC Championship Game last season and now hold the NFC’s top seed.

Then, the nightcap on Saturday pits Lamar Jackson and Josh Allen against one another for the first time in the postseason. The two battled in Week 14 (2019) when Jackson’s Ravens won 24-17 over Allen’s Bills.

Jackson went on to win the MVP award, while Allen is an MVP candidate this year. This will be the fourth playoff matchup between quarterbacks taken in the first round of the same NFL Draft in the last 30 seasons.

Next up, Sunday afternoon Cleveland takes on Kansas City after the Browns blew the doors of Pittsburgh this weekend.

So, Baker Mayfield wins his first NFL playoff game, and his reward is Patrick Mahomes and the defending Super Bowl champion Chiefs. Ouch.

They might have to play a perfect game, but Browns-Chiefs should be entertaining regardless.

Finally, on Sunday night, Tampa Bay and New Orleans battle for the third time this season, aka Brady-Brees: Part Three.

This will be the 23rd time that teams meet up for the third time in a single season. 14 of the last 22 times the team that won the first two meetings completed the three-game sweep.

New Orleans won the first two games — 34-23 in Week 1 and 38-3 in Week 9 — so they’ve got the difficult task of trying to beat a team for a third time. On the flip side, Tom Brady and the Bucs look to be the ninth team to win the third game.

All games available on AM-750 The Game via Westwood One.