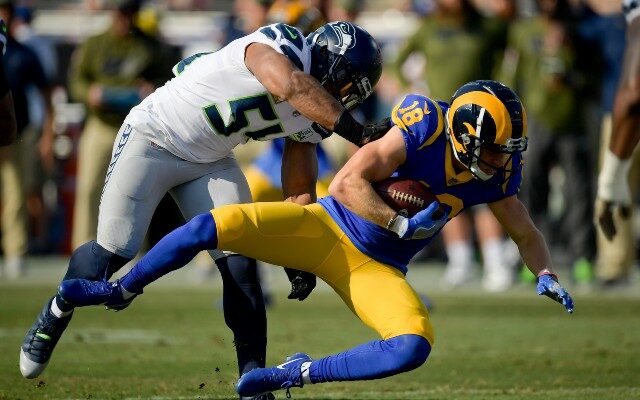 Much like Richard Sherman, Bobby Wagner is signing with a division rival after being released by the Seahawks (AP Images)

Another Seahawks legend is joining a division rival.

Future hall of fame linebacker Bobby Wagner is signing with the reigning Super Bowl champion Los Angeles Rams on a five-year deal worth $50 Million that could escalate to as much as $65 Million.  No word yet on what the guaranteed money looks like on Wagner’s deal.

Seattle fans saw a similar move made by All Pro cornerback Richard Sherman, who up and signed with the San Francisco 49ers after being released by the Seahawks in the 2017 off-season.  Sherman played three seasons with San Francisco, winning an NFC Championship in the 2019 season.  He was pleased to help break Wagner’s news on social media.

The rich get richer! Lose future HOF @VonMiller and gain future HOF @Bwagz. The @Ravens made a last min push but the Reigning champs @RamsNFL were too good to pass up.

Wagner was drafted in the second round of the 2012 NFL Draft by Seattle, No. 47 overall.  In ten seasons, Wagner was named to eight Pro Bowls, and on six occasions was named First-Team AP All-Pro.

He eclipsed 100 tackles combined in every season in Seattle, twice leading the league.

He joins a Rams defense fresh off winning a Super Bowl behind a fierce defensive line and strong secondary, but league perception viewed linebacker as a position of weakness.