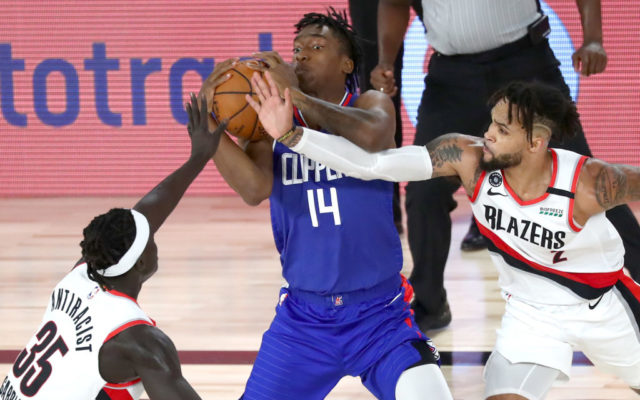 The Blazers looked great in the first half, but the second half was sloppy and inconsistent.

Portland led 108-105, and Doc Rivers took Paul George out of the game. All Portland had to do was score a few buckets in the final 5:09 to pick up another win and move back to a half game behind Memphis for the No. 8 seed.

Instead, the Clippers (who didn’t have Kawhi Leonard or Patrick Beverley all game) didn’t have Lou Williams or George on the floor, and outscored Portland 12-2 in the final 96 seconds.

One of the more unbelievable losses for the Blazers in recent memory.

To add insult to injury, Portland had chances late and it was a three from Rodney McGruder, a career 33.7% three-point shooter, that sealed the Blazers fate on Saturday.

The ending overshadows another great performance from Gary Trent Jr., who made six more threes and scored 22 overall.

Damian Lillard didn’t get a shot at the foul line until the end of the game, and he missed both which could have given Portland a 119-118 lead.

CJ McCollum was the opposite of the team. He struggled in the first half (5/13 shooting), and he was lights out in the second half (6/8 overall). He led the team with 29 points.

Portland has to bounce back quickly as they face their only back-to-back of the restart with a game Sunday against Philly. The 76ers will be without Ben Simmons, who will undergo surgery in his left knee. ESPN’s Adrian Wojnarowski reports Simmons could return “this season” if the 76ers make a deep playoff run.