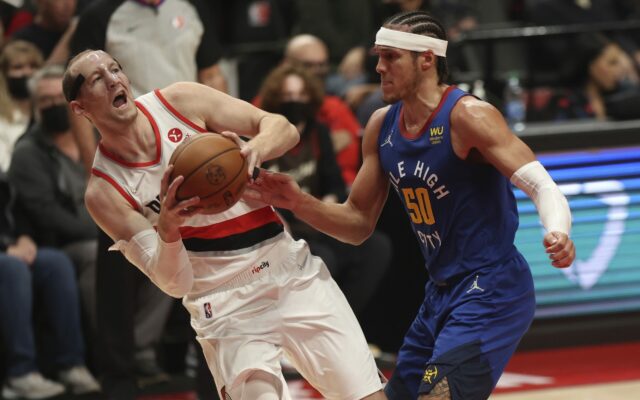 The Portland Trail Blazers extend their winning streak to four after defeating Denver 119-100 on Tuesday night at Moda Center. Denver has not won a contest since facing the Blazers nine days prior and without Nikola Jokic to a wrist injury, the undermanned Nuggets were no match for a hot Blazer side.

From the offset, Portland took advantage of Denver sloppiness, scoring 32 points off 19 Denver turnovers. Without Jamal Murray, who continues to rehab from a torn ACL, guard play has been an issue for Denver and Portland exposed just that; starting backcourt mates Damian Lillard and C.J McCollum had 25 and 32 respectively, while guard/swingman Norman Powell chipped in with 15

The Blazers ended the opening half spectacularly and everything appeared fluid on offense.

The Blazers end the half excellently going on a 18-3 run. Moda was sent into a frenzy after a pair of Dame threes, a CJ Dunk, and a buzzer-beater to put the Blazers up 66-52.

“The notable plays (during the 18-3 run) are Dame shots but the defense really sparked that run for us,” said Head Coach Chauncey Billups postgame.

Despite the late Blazer run, Denver was able to keep the game respectable at the half due to shooting 9/16 from three-point land, 46% total on the night.

Portland held onto their double-digit cushion in the third quarter and the way Portland played defense in the final 24-minutes was frankly uncharacteristic in a positive sense. More familiar, consistent offensive dominance at Moda Center, the Blazers now sit at 9-1 at home, averaging 116 per contest in Portland.

The Blazer faithful didn’t have to sweat, Denver didn’t have a lead larger than two and the Blazers held their double-digit lead the entire final quarter.

Next for Portland is a three-game road trip, starting with a quick turnaround in Sacramento tomorrow night.