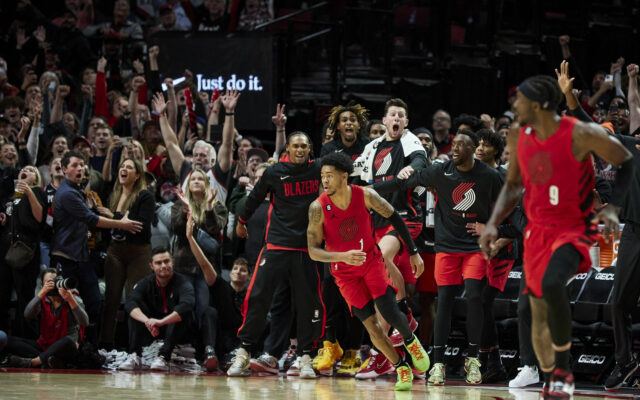 The Portland Trail Blazers bench reacts after guard Anfernee Simons (1) made a basket during the overtime of an NBA basketball game against the Phoenix Suns in Portland, Ore., Friday, Oct. 21, 2022. (AP Photo/Craig Mitchelldyer)

The Portland Trail Blazers have arguably been the story of the young NBA season so far. Portland is the lone 4-0 team in the NBA after edging out victories in the first three games of the season and cruising to a 25 point blowout on Monday night.

After an 0-4 preseason in which it allowed 119 points per game, doubts circulated about the 2022 season and the state of the franchise as a whole. That narrative quickly changed over the first week of the season. On opening night, the Blazers eeked out a 115-108 victory at Sacramento despite subpar performances from Damian Lillard and Jusuf Nurkic. A few nights later at the home opener, the Blazers used a 41 point lift from Damian Lillard to edge the Phoenix Suns in overtime, 113-111. Lillard reciprocated 41 points against the Los Angeles Lakers on Sunday but Jerami Grant was the hero with the game-winning layup in a 106-104 victory. After three straight tight wins, Portland used a 22 point third quarter eruption from Anfernee Simons on Monday night to blast the Denver Nuggets, 135-110.

Four games is a small sample size in an 82 game season, and you probably shouldn’t expect an NBA championship during the 2022-2023 campaign. But with the noise and uncertainty surrounding the Trail Blazers over the past few years, these four games should be enough to feel good about the state of the franchise. From a coaching standpoint with the unproven Chauncey Billups, the team is overcoming demons defensively with the NBA’s 9th ranked defense. And if there were doubts about new general manager Joe Cronin, this roster boasts more wing versatility and depth than any recent team. Plus, the group is connected and has made sense together on the court. The NBA season is a marathon, but a four game stretch has arguably inspired the most hope for Trail Blazers fans since the Western Conference Finals run in 2019.