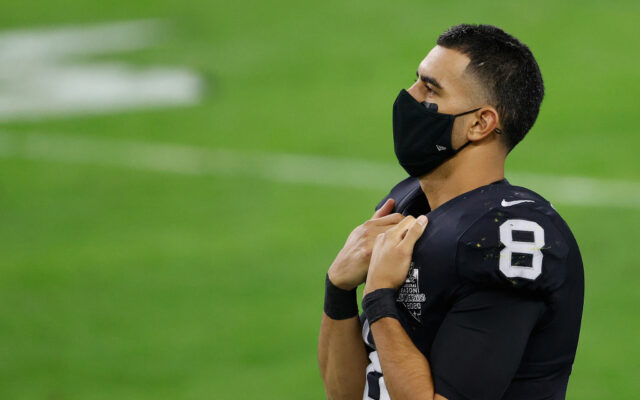 Raiders QB Marcus Mariota on the sidelines during the Dec. 17, 2020 game against the Los Angeles Chargers. (Photo by Christian Petersen/Getty Images)

Wednesday’s interview between John Canzano and Mike Yam of the NFL Network was another wide-ranging chat between the two professionals.

First, Yam discussed some of the latest NFL Pro Days he’s been to and the players who stood out. If you’ve never seen an NFL Pro Day, you’ll want to check out what Yam had to say (1:30).

Canzano also gauged Yam’s thoughts on the possibility of former Oregon and current Las Vegas Raiders backup quarterback Marcus Mariota being an NFL starter again. Yam even posed a question back to Canzano.

“Were you surprised by the restructuring of [Mariota’s] contract? I was,” Yam said.

“[Mariota] gave up a lot of cash there, and in my mind I’m like: ‘why are you doing that, man? You might have been to even force the hand of the Raiders to go and ship out so you have that opportunity to start.’ So, I found that interesting, to the point where I was — based off of what we saw in that great game and got to see two Oregon quarterbacks with [Justin] Herbert and Mariota going head-to-head in an NFL game — I actually started to think to myself maybe Marcus doesn’t, I know this sounds weird but like, maybe he doesn’t want to start. Which I know seems even weird for me to say it, but why sacrifice that many dollars when you have the opportunity maybe to once again, force the hand of the team to try to trade you so you have an opportunity to go and get a starting job. So, I found that peculiar. But I do think it’s clear to me based off of that performance [against the Chargers] that [Mariota] is more than capable of being an NFL starter,” Yam told Canzano.

Other topics included the 49ers draft moves, Yam’s transition from the Pac-12 to the NFL and more.

For the full interview, listen below