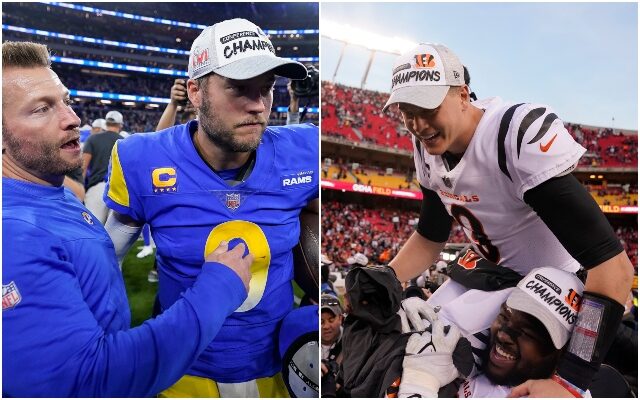 The matchup for Super Bowl 56 is set!

For a second straight year, the NFL’s title game will be played in the home stadium of one of the participants.  The Rams came from behind to beat the Niners 20-17 to win the NFC Championship Game.  They will play in their home stadium, SoFi Stadium, the site of Super Bowl 56.

Their opponent?  The AFC Champion Cincinnati Bengals.  That’s right.  The Bengals, despite falling behind 21-3, stunned the reigning conference champion Chiefs in overtime, 27-24, to advance to their first Super Bowl since 1988.

The game will be played on Sunday February 13th in Los Angeles.

Kickoff will be just past 3:30pm.  All the pregame, play-by-play, and postgame coverage can be heard exclusively on 750-AM The GAME from Westwood One.

Who ya got?  Joe Burrow and the upstart Bengals?  Or Aaron Donald and the Rams, playing their second Super Bowl in four years?  Let us know on social media @750TheGame, and tune in for the best takes from John Canzano (12-3pm), Dan Patrick (6-9am), and Jim Rome (9a-12pm) on the GAME.